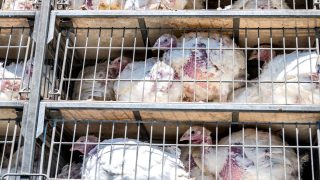 The Farm System Reform Act would overhaul the United States’ cruel and environmentally destructive animal agricultural industry, in part, by placing a moratorium on the largest factory farms.

An estimated 9 billion land animals are killed for food in the United States annually. The vast majority of them live in cages and crates so small that they cannot turn around or stretch their limbs. Farmed animals held in factory farms are unable to engage in natural behaviors or even go outside. They endure untreated illnesses, painful injuries, and are subjected to cruel practices like having their testicles, tails, horns, beaks, or toes removed without anesthesia until they are finally slaughtered.

In addition to being responsible for extreme animal suffering, industrial animal agriculture is a major contributor to air and water pollution. Many of these impacts are felt most acutely by low-income communities of color. Industrial animal agriculture is controlled by a few gigantic, vertically integrated—meaning every step of the supply chain is controlled—multi-national corporations. These corporations operate without regard for our environment, animals, public health, or workers’ rights.

Sponsored by Senator Cory Booker (D-NJ), and Representative Ro Khanna (D-CA), the Farm System Reform Act (S. 3221 and H.R. 6718) would overhaul our broken food system by placing a moratorium on the largest factory farms—immediately prohibiting the creation or expansion of large factory farms and requiring the cessation of such operations by 2040. It’s the first step towards shifting away from our current factory farming model and toward a more sustainable agricultural system.

Additionally, the bill would hold large factory farms responsible for their environmental impacts, restore mandatory country-of-origin labeling requirements for cow, pig, and dairy products as well as prohibit the U.S. Department of Agriculture (USDA) from labeling meat products imported from other countries as “Product of USA.”

The Animal Legal Defense Fund strongly supports this bill. Show your support for the Farm System Reform Act by signing our petition. 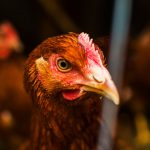