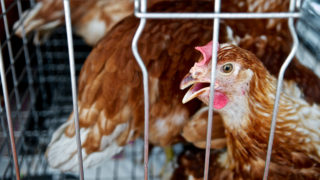 On the vast majority of factory egg farms, hens are confined to cages so small that they cannot turn around or extend their wings. An Act Relating to Farm Animals (HB 538/SB 346) would ban the intensive confinement of hens used by the egg industry in Hawaii as well as ban the sale of eggs from hens kept in such cruel conditions by 2026.

Hens used by the egg industry are among the most abused animals in the country yet have few legal protections. In most states, hens can legally be intensively confined in battery cages so small they cannot extend their wings or lie down comfortably. Battery cages are tiny wire cages where each hen is given less space than a sheet of printer paper to spend her entire life.

An Act Relating to Farm Animals (HB 538/SB 346 SD2) would phase in a requirement that hens used by the egg industry and raised in Hawaii live in cage-free conditions — outlawing battery cages — and that eggs sold in Hawaii meet this same standard. It would also mandate access to environmental enrichments that allow the birds to engage in certain vital natural behaviors such as perching, nesting in boxes, dust bathing, and fully extending their wings. These enrichments vastly improve the welfare of hens.

The bill was introduced on January 22, 2021 in the Senate by Senator Mike Gabbard (D-20) as well as Senators Chris Lee (D-25), Karl Rhoads (D-13), Gil Riviere (D-23), Maile Shimabukuro (D-21), and Stanley Chang (D-9) and in the House by Representative Stacelynn K.M. Eli (D-43) as well as Representatives Cedric Asuega Gates (D-44), Lisa Kitagawa (D-48), Amy Perruso (D-46), Gregg Takayama (D-34), Lisa Marten (D-51), and Scot Matayoshi (D-49). The House bill was referred to the House Committees on Agriculture and Finance. The Senate bill was referred to the Senate Committees on Agriculture and Environment and Judiciary, which each passed amended versions of the bill (SB 346 SD 1 and SB 346 SD 2). The Senate passed SB 346 SD 2 unanimously on March 9, 2021. The bill was was then transmitted to the House, where, unfortunately, it failed to be scheduled for a hearing by the House Committees on Agriculture or Finance. The 2021 legislative session ended on April 29, 2021.

Learn more about farmed animals and the law.