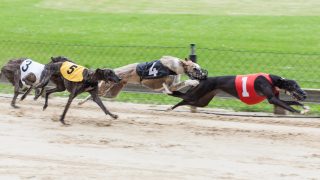 The end of the Florida greyhound racing industry ensures that thousands of dogs will no longer be subjected to cruelty in the name of entertainment.

On November 6, 2018, Floridians overwhelmingly voted in favor of Amendment 13 – ending the cruel greyhound industry in the state by 2021. Greyhounds previously forced to race will now be able to retire – no longer will they be confined to small wire cages or given dangerous drugs to enhance their performance. The Animal Legal Defense Fund is proud to have been part of the coalition of organizations supporting this historic grassroots campaign. Additionally, Animal Legal Defense Fund attorneys submitted a legal brief in the ultimately unsuccessful lawsuit initiated by greyhound industry groups challenging the validity of Amendment 13.

Many racing dogs suffer injuries while racing and, according to state records, a racing greyhound dies on average every three days on a Florida track. Of these dogs, 94% were three years old or younger. Common injuries include broken legs, paralysis, head trauma, and broken backs. Dogs have also been electrocuted after touching the track’s high voltage lure. Some dogs actually die on the tracks, others are euthanized behind closed doors.

Additionally, greyhounds are routinely drugged, and female dogs are regularly injected with anabolic steroids in order to keep them racing. More than 400 racing greyhounds tested positive for cocaine, novocaine, oxycodone, and lidocaine in the last ten years.

At the time of Amendment 13’s passage, Florida was home to 11 out of 17 operational greyhound racetracks in the United States. Greyhounds are at a disadvantage even before they are born. Thousands are bred annually – many more than are needed to race – in an attempt to create the fastest dogs. These social dogs are forced to spend most of their time alone, confined in rows of double-stacked, warehouse-style metal cages that are barely large enough for them to stand up or turn around in for 20-23 hours a day. Instead of blankets or bedding, dogs are only provided shredded paper or discarded carpet pieces.

Though greyhound racing persists in a handful of other states, the majority of racing occurs in Florida. The end of the Florida greyhound racing industry ensures that thousands of dogs will no longer be subjected to cruelty in the name of entertainment.