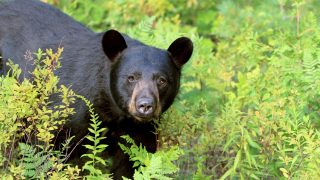 An Act Concerning the Feeding of Black Bear (New Jersey)

This important “Bear Smart” bill aims to protect black bears in New Jersey by preventing unintentional feeding, a root cause of human-bear interactions.

New Jersey’s black bears are at risk — and an important state bill would help protect them and prevent human-bear encounters.

Current New Jersey law prohibits intentionally feeding black bears. That’s a good first step in preventing them from becoming habituated to human-sourced food, but it doesn’t go far enough. The “Bear Smart” bill,  A.1967/S.1891, would clarify and expand the law to also prohibit the unintentional feeding or luring of black bears, through activities such as baiting white-tailed deer or leaving dog or cat food outside overnight in areas known to be frequented by bears. 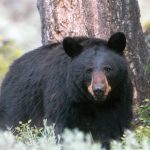 When bears wander into human neighborhoods, they’re typically drawn by easily accessible food, such as unsecured trash cans, companion animal food, and low-hanging bird feeders. Bears who eat these human-sourced foods — or piles of sugary baits left by hunters who bait deer and other animals — can become habituated to and dependent on them, rather than their natural diet. Science also shows that human-linked food sources can affect the biology of black bears in ways that are contrary to sound ecological management principles.

Stopping human-bear encounters before they happen is the safest option for residents and bears alike — and research has shown that the most humane and effective way of doing this is by securing human-linked sources of food. A.1967/S.1891 would replace the current law’s blanket exemption for the unintentional feeding of black bears with a narrower, more specific set of exemptions. Activities that would not be considered bear feeding under the bill include:

“We are committed to nonlethal, humane but smart and safe means to control the [black bear] population,” Gov. Phil Murphy has said of his opposition to the inhumane bear hunts that have previously taken place in the state. New Jersey’s bears have long been under attack by trophy hunters — but in 2021, Gov. Murphy did not allow a black bear hunt to take place, pledging that such a hunt would not happen as long as he’s in office. The Animal Legal Defense Fund applauds the decision to protect bears and base a management plan on sound scientific principles. Enacting “Bear Smart” legislation is an important part of the humane path forward.

For more information about New Jersey’s animal protection laws and additional opportunities to take action for animals in the state, visit aldf.org/newjersey.