For the second time, the Animal Legal Defense Fund has intervened to help California defend its landmark farmed animal protection law, Proposition 12. The case will next be heard by the U.S. Supreme Court.

Oral arguments expected to be heard in late 2022

On innumerable factory farms across the U.S., farmed animals are confined in crates or cages so small that they cannot even turn around or flap their wings.

In multiple court cases, the Animal Legal Defense Fund has fought to defend the ability of states to enact laws protecting animals from cruel intensive confinement.

In addition to updating minimum space requirements for animals raised in California, Prop 12 also requires that pork, eggs, and veal that are imported into California from out of state meet the same standards.

The latter provision has drawn the ire of the factory farming industry, which in multiple legal challenges has sought to overturn Prop 12. The industry groups have claimed that the law unconstitutionally regulates interstate commerce — an argument multiple federal courts have roundly rejected.

In December 2019, two industry groups — the National Pork Producers Council and the American Farm Bureau Federation — filed the second such lawsuit seeking to undermine California’s humane reform. And for the second time, the Animal Legal Defense Fund and coalition partners intervened to help California defend the constitutionality of the law.

In particular, the industry groups are challenging Prop 12’s requirement that each pregnant pig have a minimum of 24 square feet of space — in contrast to the mere 14 square feet in a typical gestation crate used to confine pregnant pigs on factory farms. 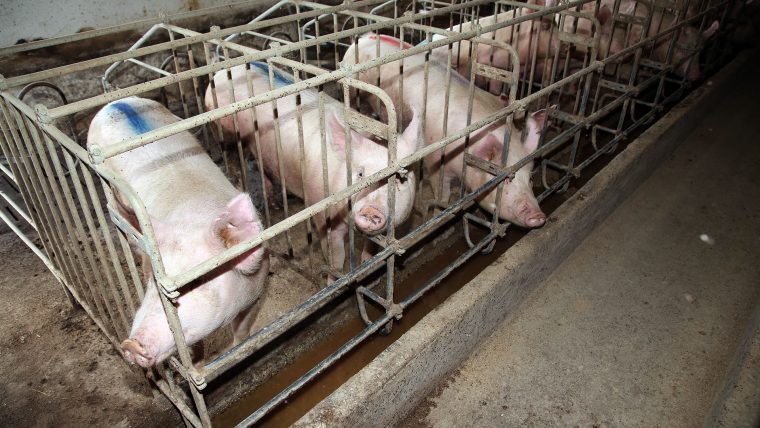 Though the law provided a multi-year phase-in period to meet California’s new requirements, and multiple producers have noted their ability to comply with the new requirements, the plaintiff organizations nevertheless argue that Prop 12 is overly burdensome on producers.

“Opponents [of Prop 12] insist that California voters are trying to control how animals are raised in Iowa, but it is the producers’ lawsuit that would have wide-ranging negative effects on state sovereignty. If the Supreme Court were to adopt the arguments the producers advance, hundreds of state laws that have incidental effects on business activity in other states could suddenly be vulnerable to legal attack. Such a precedent could lead to states being unable to pass market regulations to protect their citizens. Today the argument is about pork, but tomorrow it could be about e-cigarettes or chemical-laden baby foods.”

The NAMI lawsuit, in which the Animal Legal Defense Fund’s coalition also intervened, was decided in the animals’ favor at both the district court and appeals court levels. NAMI petitioned the U.S. Supreme Court to take up its case, but the Court declined, allowing the animals’ victory to stand.

Similarly, the National Pork Producers Council and American Farm Bureau Federation’s lawsuit was dismissed by the U.S. District Court for the Southern District of California in April 2020, and the ruling was upheld by the U.S. Ninth Circuit Court of Appeals in July 2021.

“Under our precedent, state laws that regulate only conduct in the state, including the sale of products in the state, do not have impermissible extraterritorial effects. … A state law may require out-of-state producers to meet burdensome requirements in order to sell their products in the state without violating the dormant Commerce Clause. … Even if a state’s requirements have significant upstream effects outside of the state, and even if the burden of the law falls primarily on citizens of other states, the requirements do not impose impermissible extraterritorial effects.”

But on the heels of these two losses, the National Pork Producers Association and American Farm Bureau Federation petitioned the Supreme Court to take up their case. In March 2022, the Court agreed to review it.

While the Animal Legal Defense Fund sees no need for the Supreme Court to consider this case on an issue that has been universally decided in the animals’ favor, centered on a rejected argument that the Court previously declined to review in the similar NAMI case — it is nonetheless remarkable that the issue of farmed animal protection will be heard before the highest court in the land, with animals entering on the winning side.

Who is being sued, why, and under what law: The industry groups National Pork Producers Council and American Farm Bureau Federation are suing California, challenging the state’s farmed animal protection law Prop 12 under the claim that it violates the Constitution’s dormant Commerce Clause.

The argument has been rejected in multiple courts. “[E]ven though the [industry groups’] complaint plausibly alleges that Proposition 12 has an indirect ‘practical effect’ on how pork is produced and sold outside California, we have rejected the argument that such upstream effects violate the dormant Commerce Clause,” Judge Sandra S. Ikuta of the U.S. Ninth Circuit Court of Appeals wrote in her opinion upholding a lower court’s dismissal of the case.

What court is the lawsuit filed in: Originally filed in the U.S. District Court for the Southern District of California, that court’s ruling was later upheld by the U.S. Ninth Circuit Court of Appeals. The case will next be heard before the U.S. Supreme Court.

Why this case is important: Animals suffer enormously on factory farms as a result of standard industry practices, including the extreme confinement of mother pigs, hens used in the egg industry, and calves raised for veal. Pregnant pigs are commonly kept in gestation crates so small that the animals are unable to turn around and scarcely able to move forward or backward. They spend the majority of their adult lives trapped in these conditions, producing piglets to be raised and slaughtered, before they themselves are killed.

Meanwhile, the conditions in which animals are kept on factory farms also imperil public health through the risk of zoonotic disease transmission, as well as endangering the environment, worker safety, and the health and well-being of nearby communities.

States have the right to pass laws that protect animals and the public, and laws like Prop 12 do not unduly burden interstate commerce. The Animal Legal Defense Fund is committed both to advocating for the passage of such laws and defending the ability of states to enact them.