Worst Places to Be an Animal Abuser

SAN FRANCISCO — Manitoba, Nova Scotia, British Columbia, and Ontario are the worst provinces in Canada to be an animal abuser, according to a new report released today by the Animal Legal Defense Fund (ALDF). Based on a detailed comparative analysis of the animal protection laws of each jurisdiction, the report recognizes the provinces and territories where laws protecting animals have real teeth, and calls out those like Quebec and Nunavut —the worst in Canada this year for animal protection laws—where animal abusers get off easy. ALDF’s eighth annual report, the only one of its kind in the nation, ranks every province and territory on the relative strength and general comprehensiveness of its animal protection laws. 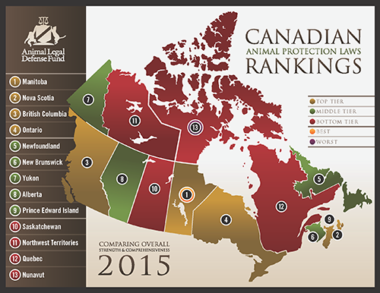 Manitoba, Nova Scotia, British Columbia, and Ontario continue to take top honors in 2015 for providing strong protections for animals.  In these provinces, animal protection laws cover most species, require veterinarians to report suspected animal cruelty, and include incarceration and large fines as possible penalties in cases of non-compliance. Additionally, legislation in all four provinces takes into account animals’ ability to suffer psychologically—at least for certain species.

Nova Scotia shows the most significant improvement, moving from fourth to second position. Nova Scotia’s improved ranking is attributable to its enactment of stiffer maximum penalties, with animal abusers now facing fines up to $75,000 and imprisonment for up to two years for a third or subsequent offence. The province also broadened the range of protections benefitting animals, including protection against being kept in unsanitary conditions and protection from abandonment that is likely to cause distress. Additionally, Nova Scotia’s amended legislation now explicitly recognizes animals’ ability to suffer psychologically.

Quebec continues to occupy the bottom tier when it comes to animal protection, along with Saskatchewan, the Northwest Territories, and Nunavut. However, with the recent introduction of a new bill designed to significantly enhance the province’s animal protection legislation, ALDF is hopeful that Quebec – currently ranked the best province to be an animal abuser – will show marked improvement in next year’s rankings.

The Animal Legal Defense Fund was founded in 1979 with the unique mission of protecting the lives and advancing interests of animals through the legal system.