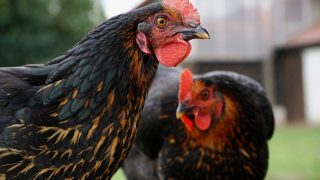 Missouri’s crusade to roll back farmed animal protections approved by California voters suffered a fatal blow today when a panel of the Ninth Circuit Court of Appeals upheld a lower court’s dismissal of the case (State of Missouri ex rel. Koster v. Harris). The Missouri Attorney General’s lawsuit sought to gut California’s Prevention of Farm Animal Cruelty Act, or Proposition 2, which passed in 2008 and went into effect two years ago this January.

The law affords farmed animals more humane living conditions, requiring that farmers provide egg-laying hens, calves used for veal and pregnant pigs adequate space to lie down, stand up, fully extend their limbs and turnabout freely within their enclosures. In a showing of California’s staunch commitment to humane treatment, the state’s General Assembly voted to require all eggs sold—in addition to those raised—in the Golden State to meet these same requirements, improving the lives of millions of hens throughout California and across the country.

However, rather than permit their egg producers to compete in the new, California-driven humane marketplace, Missouri and five other states decided to sue. In February 2014, before the law even went into effect, the six states filed a federal lawsuit to overturn it. A few months later, the Animal Legal Defense Fund, along with Farm Sanctuary and Compassion Over Killing, submitted an amicus brief in support of California’s motion to dismiss Missouri’s baseless suit, and on October 2, 2014, a federal judge in Northern California granted California’s motion, prompting Missouri and the states to appeal.

Now, the Ninth Circuit has also sided with California, affirming the lower court’s finding that Missouri has no standing to sue, because its lawsuit benefits not the people of Missouri but the private economic interests of an unidentified number of its egg producers. In short, the Missouri Attorney General’s naked attempt to use state power to do big ag’s bidding utterly failed. While the Ninth Circuit left the door cracked for Missouri to file a new complaint if it can show that the law, now in full effect, is harming the state, the Animal Legal Defense Fund is hopeful that Missouri and the five other states will see that battery cages are quickly becoming obsolete, and give up their pointless campaign.

The Animal Legal Defense Fund celebrates this victory for hens and is committed to fighting for a world in which inhumane battery cages are relegated to the dustbin of history.