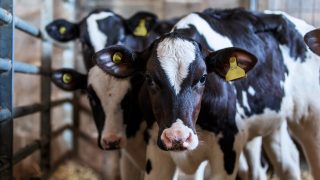 This action is for US residents only.

On factory farms across the U.S., animals such as mother pigs and chickens used in egg production spend most of their lives in crates or cages so small that they can’t even turn around or flap their wings. When voters have had the chance to reject this cruelty at the state level, they’ve overwhelmingly favored initiatives to ban the most inhumane forms of animal confinement.

Now, some federal lawmakers want to revoke the rights of states to make their own laws about agricultural practices. A dangerous new bill known as the Exposing Agricultural Trade Suppression (EATS) Act (H.R. 4999/S. 2619) could undermine a wide range of state laws, such as those banning the sale of products from cruel gestation crates, veal crates, and battery cages. But the EATS Act doesn’t stop there. It could also invalidate numerous other state laws involving food safety, rural communities, and the environment, and could even jeopardize state laws designed to protect dogs from the cruelty of puppy mills.

Every animal advocate’s voice is needed to help defeat this dangerous bill. Please send a message to your federal lawmakers using the form below. And remember, personalizing your message will help it stand out.