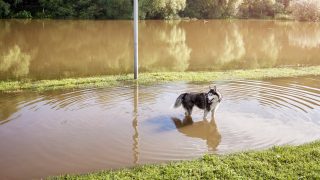 When a natural disaster is coming, it's essential to have lifesaving plans in place — including for your animal family members.

Knowing the law is an important part of planning. This is an overview of the key federal law that affects companion animals in a natural disaster: The Pet Evacuation and Transportation Standards Act, better known as the PETS Act.

What is the PETS Act?

The PETS Act is a federal law that was passed in 2006 shortly after Hurricane Katrina. In order for states, cities, and counties to receive federal funding for their disaster relief plans, those plans must “account for the needs of individuals with household pets and service animals before, during, and following a major disaster or emergency.” Since then, more than 30 states have amended their disaster relief plans to account for the needs of companion animals and service animals.

The Act allows the Federal Emergency Management Agency (FEMA) to provide funding to states and localities for the creation, operation, and maintenance of pet-friendly emergency shelters, along with other emergency preparedness actions for companion and service animals. FEMA is also permitted to reimburse state and local governments for rescuing, caring for, and sheltering animals in an emergency.

It’s important to know what the PETS Act does, as well as what the law doesn’t do. Frequently, misinformation will spread about what the PETS Act does and does not require. For example, one common — and incorrect — assertion that is regularly shared on social media is that the law requires hotels and motels to accept evacuees’ companion animals. This is not the case. Hotels and motels are not required to accept animals. This misconception is so common, and so wrong, that FEMA has addressed it on the “rumors” section of its website.

Because of the PETS Act, it’s more likely your community has an emergency shelter that can accommodate companion animals. Find out where that shelter is before the disaster or emergency hits.

And also be sure you find out what will be required of you and your animals to stay there. For instance, it’s often required that you provide proof that your animals are licensed and vaccinated. You may also need to bring a crate and food with you.

What is the background of the PETS Act?

The PETS Act was passed in 2006, largely because of what’s seen as the failures to protect animals, and families with animals, in Hurricane Katrina.

There was lack of animal-friendly emergency shelters in areas affected by the hurricane, and emergency plans did not account for animal family members. Because of this, many in harm’s way decided not to evacuate, and instead stayed in place, keeping themselves and their families in harm’s way due to the dearth of options for their animals. A 2006 poll found that in fact 44 % of people who did not evacuate for Katrina made that choice because of their companion animals.

Those who tried to evacuate with their companion animals were faced often faced with terrible choices, too. Many people separated from their animals did so unwillingly. No one can forget the heartbreaking accounts of people fleeing Katrina who brought their dogs and cats with them to evacuation buses, only to be told by officials they must leave the animals behind.

It’s estimated that as many as 100,000 companion animals were separated from their families during and after the storm, with perhaps 70,000 of those dying. No one wanted to see those figures, and those tragic stories, repeated when another disaster struck.

Where does the law need improvement?

The PETS Act is widely cheered as a major step forward in how companion animals are treated, and protected, during hurricanes and other disasters.

However, here are some ways improvement is still needed: