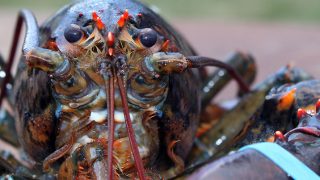 A popular seafood store in Sydney, Australia, was charged with animal cruelty for its treatment of lobsters, resulting in the first animal cruelty conviction in New South Wales (NSW) involving crustaceans. In both the U.S. and Australia, no matter how horrendously they are treated, it is rare for criminal cruelty charges to be brought in cases involving animals who are considered “food.” This is especially true when those animals are non-vertebrates, making this case particularly notable.

The conviction of Nicholas Seafood resulted from an inspection by the NSW Royal Society for the Prevention of Animals (RSPCA) after it obtained video showing a worker butchering a lobster alive with no attempt to render the animal unconscious beforehand, in violation of NSW’s Prevention of Cruelty to Animals Act. The video shows a lobster struggling to escape during the dismembering process, remaining alive after the animal’s tail is cut off—which according to the RSCPA does not kill but causes immense pain—and before being put through a band saw.

The RSPCA issued a fine, but Nicholas Seafood decided to take the matter to court, resulting in the conviction of an Act of Animal Cruelty and a $1,500 fine. The company has said its staff have now been properly trained to kill the lobsters in a manner considered “humane” according to government guidelines.

Whether crustaceans are covered under animal cruelty laws depends on how the specific legislation defines “animal.” There is no national animal protection law in Australia, but each state or territory has its own law protecting animals. Some restrict the definition of animal to vertebrates, but others, including NSW, include crustaceans in that definition. Crustaceans were added to NSW’s Prevention of Animal Cruelty Act in 1997 “after it was medically proven they feel pain.” In contrast to the vertebrate species included in the law, crustaceans are only covered when being prepared as food.

In addition to about half of Australian states and territories, New Zealand, Norway and Switzerland include crustaceans in their national animal protection legislation. United Kingdom animal advocacy group Crustacean Compassion is currently campaigning for crabs, lobsters and other crustaceans to be included under the definition of “animal” in the Animal Welfare Act 2006 of England and Wales.

The historical justification for excluding non-vertebrates from animal cruelty laws is predicated in part on the belief that they are unable to feel pain, a belief which has begun to crumble under the weight of mounting scientific evidence to the contrary. As research has begun to show that lobsters and crabs experience pain and suffer distress, interest in their wellbeing has increased.

In the U.S. too, whether crustaceans are covered by criminal animal cruelty laws depends on how each state’s applicable statue defines “animal.” Even if crustaceans are not expressly excluded, it is highly unlikely a prosecutor would pursue cruelty charges against a seafood company. A 2013 People for the Ethical Treatment of Animals (PETA) undercover investigation into cruelty at a Maine lobster plant is illustrative. Video revealed lobsters and crabs being ripped apart while alive and fully conscious, and the organization filed a complaint requesting the owner of the facility be investigated for possible violations of the state’s criminal animal cruelty statute. Although Maine’s animal cruelty statute covers “every living, sentient creature” besides human beings, the district attorney declined to pursue charges, asserting “it is far from clear that the Legislature intended to include lobsters and crabs within this definition…the opposite intention is more likely.”

Despite the general lack of legal protections for aquatic animals, there is reason to be optimistic. Along with the groundbreaking outcome of the Nicholas Seafood case, public awareness is growing about the capacities of crustaceans and other aquatic animals such as fish, who also have little to no protection under the law despite their widespread (and increasing) use in intensive farming and research.

In another positive development, the Center for Animal Law Studies at Lewis & Clark Law School recently launched a new, first-of-its-kind Aquatic Animal Law Initiative (AALI), which works to protect and promote the interests of aquatic animals by advocating on their behalf through the legal system and providing education about their cognitive, emotional and physiological capacities. As the first entity to focus on questions broadly relating to the legal protection of aquatic animals, we can expect the AALI to play a significant role in steering policy, law and public opinion about these vastly misunderstood animals in a more humane direction.