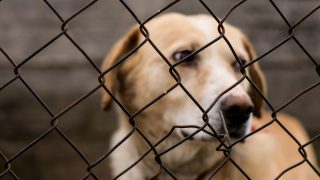 Alabama state law requires each county in the state to maintain a “county pound and an impounding officer” for impoundment of stray dogs, cats and ferrets. Barbour County currently has no shelter, forcing residents to take on the burden of sheltering and rehoming stray and abandoned animals.

The Animal Legal Defense Fund is representing Barbour County citizens who have been harmed by the county’s failure to comply with state law. The county began to build a pound 14 years ago, but it has never opened and is deteriorating. Still, the County Commission has repeatedly taken funds and equipment appropriated specifically for the animal shelter and services and put them toward other projects.

In the meantime, the problem of animal abandonment and other animal cruelty crimes in the county has increased.

In Barbour County, stray dogs and other animals roam the streets and through residents’ property. Residents’ livestock have been attacked and killed.

“Egregious acts of animal cruelty, well-known to be a precursor to violent crimes against people, occur with impunity,” says Animal Legal Defense Fund Executive Director Stephen Wells. “After sustaining injuries from cars, dead and dying animals suffer by the side of the county’s roads, with no one designated to help them or even pick them up.”

In one highly publicized incident in April 2016, 11 puppies were found in a garbage bag with their dead mother, likely because there is nowhere for the public to surrender animals.

At least one resident represented in this lawsuit routinely receives calls from private citizens about injured, sick or dead animals (many obvious victims of animal cruelty). These callers are referred to her personal cell phone by the local police. In one such case, this Barbour County resident found a dog suffering from a gunshot wound. She took pictures and notified local law enforcement of the crime, including the identity of a suspect based on witness reports.

Law enforcement declined to make a report of the incident or investigate.

In addition to animal cruelty complaints, there is a serious public safety concern in Barbour County, which has a growing population of free roaming animals that the county refuses to address. In one recent incident, in the City of Eufaula, located in Barbour County, a resident found a dead bat that tested positive for rabies.

Eufaula issued a public health warning advising citizens to notify their local animal control officer if they see an animal they suspect to have rabies. However, outside of Eufaula, which has its own animal control services, Barbour County residents have no one to call.

Today’s lawsuit is intended to compel Barbour County to abide by Alabama law and maintain a pound for the impounding of dogs, cats and ferrets, and employ an impounding officer. The Animal Legal Defense Fund thanks the firm of Baker, Donelson, Bearman, Caldwell, & Berkowitz, PC for its assistance in this case. Photos and complaint are available upon request.