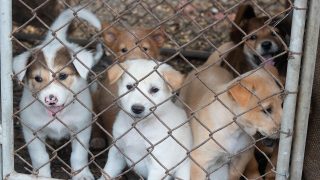 Pet Store Shuts Down as Lawsuit Continues Against Other Puppy Launderers

SAN FRANCISCO — Today the Animal Legal Defense Fund announced that a settlement agreement has been reached with the Animal Kingdom pet store in a high-profile lawsuit over a puppy laundering scheme to unlawfully circumvent the California “retail pet sale ban” — a law that bans the sale of dogs from commercial breeders, commonly called puppy mills.

As part of the settlement, Animal Kingdom has committed to refraining from “knowingly acquiring or selling animals” obtained from Bark Adoptions, Rescue Pets Iowa, or other known sham “rescue” groups, which function as fronts for commercial breeding operations in order to evade the retail pet sale ban. Animal Kingdom also shut down its chain of pet stores after the lawsuit was filed.

The lawsuit will continue against the sham rescue groups, Bark Adoptions and Rescue Pets Iowa.

“California enacted an important law to combat puppy mills and promote adoption of animals languishing in shelters,” says Animal Legal Defense Fund Executive Director Stephen Wells. “We will use all legal tools at our disposal to ensure this law is followed, and to put an end to illegal business schemes that treat puppies like cash crops without regard for their well-being or the law.”

California’s retail pet sale ban, which went into effect on January 1, 2019, requires pet stores to obtain animals only from public animal control agencies, animal shelters, or federally registered 501(c)(3) rescue groups that do not obtain animals from breeders or brokers for compensation.

The lawsuit, filed by the Animal Legal Defense Fund on behalf of nonprofit organizations Bailing Out Benji and a corporation for the prevention of cruelty to animals, alleged that Animal Kingdom was circumventing the law and misleading consumers by using Bark Adoptions as a middleman to launder puppies commercially bred for profit and labeling them “rescue” animals.

Animal Kingdom continued to sell 8-week-old purebred and designer puppies for over $2,000 into 2019. The store identifies the source of these puppies as Bark Adoptions, a newly formed group that incorporated in November 2018. In turn, Bark Adoptions has obtained truckloads of puppies originating from puppy mills in the Midwest.

“This lawsuit is a huge win for the parent dogs still trapped behind at the puppy mills and we are grateful for our legal team at the Animal Legal Defense Fund for their hard work with this case,” says Bailing Out Benji Executive Director and Founder Mindi Callison.

There is now a separate proposed law in California that is moving through the state legislature, AB 2152, known as “Bella’s Act,” which would ban the retail sales of dogs, cats and rabbits but still allow pet stores to partner with shelters to hold adoption events.

California was the first state to pass a pet retail sale ban in 2017, with Maryland following in 2018. Many major cities have instituted similar laws, including Chicago, Boston, and Philadelphia.