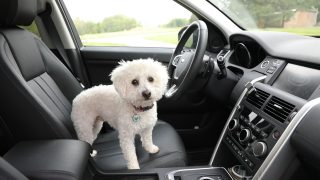 On June 22, 2017, just before a weekend heat wave brought temperatures to over 100 degrees across Oregon, Governor Kate Brown signed into law House Bill 2732 to protect dogs and children left in hot cars. Oregon is the 11th state to pass such a “Good Samaritan law,” and the fourth to do so just this year.

Oregon’s new law, which became effective immediately, expands protections for vulnerable companion animals by providing that anyone – not just law enforcement – may enter a motor vehicle, “by force or otherwise,” to remove an unattended child or domestic animal without fear of criminal or civil liability, as long as certain requirements are met. To fulfill these requirements, a person must:

During the past two years, there has been a steady increase in the number of states passing legislation to address the issue of companion animals left in hot cars, a growing subset of which shield regular citizens (as opposed to law enforcement) who rescue an animal in distress from criminal and civil liability. In 2017, similar “Good Samaritan laws” have passed in Arizona, Colorado, and Indiana. Of the additional seven states that empower civilians to take action to help an animal confined in a vehicle in dangerous weather conditions, six passed laws in 2016 (California, Florida, Massachusetts, Ohio, Wisconsin, and Vermont), and one passed its law in 2015 (Tennessee).

H.B. 2732 passed with the help of a third-grade Girl Scout troop, whose members were instrumental in introducing and lobbying for the bill, according to a news release by the Oregon State Legislature Senate Majority Office:

“A small group of members from the Girl Scout Brownie Troop 10037 in the Salem area proposed the legislation. Troop members testified in the House and Senate committee hearings throughout the process. Rep. Brian Clem (D-Salem) – the father of one of the scouts – authored and introduced the bill.”

Why is this legislation necessary? Although public awareness has been on the rise about the dangers of leaving children or animals in hot cars as a result of media coverage and outreach campaigns by many groups, including the Animal Legal Defense Fund, too many people remain unaware of the potential risk, as evidenced by the number of animals who still die in hot vehicles every year. For example, although it has been shown to have little effect on the interior temperature of a vehicle, many people believe leaving windows open on a warm day is sufficiently protective, or do not realize how quickly temperatures can soar to life-threatening levels inside a car even when the outside temperature is as low as 70 degrees. Even on demonstrably hot days, some people still do not realize the dangers of leaving an animal inside a vehicle. In fact, just one day after Oregon’s new law went into effect, a Good Samaritan made use of it to rescue a dog.

The outside temperature was 89 degrees in downtown Portland when Shawna Harch broke into a locked car, with its windows rolled up and moonroof cracked only an inch, to rescue the small dog confined inside in a crate. She had tried to locate the owners, called the police (who said they would dispatch someone but that it could be a while), and attempted to set off the car alarm to no avail. With the help of passersby, a half hour after noticing the barking dog – who had now stopped barking and appeared to be in distress – she was able to break the window and remove the dog. In an essay detailing the incident, Harch recounted what happened when the owners finally returned:

“The police checked the dog and then began taking down my information. In the midst of this, the owner of dog and the owner of the car finally appeared. They were two young men who looked to be about 17 or 18 years old. They appeared shocked and puzzled. The owner was perplexed, saying he thought that leaving the moonroof cracked was sufficient. I, along with the police officers, explained it was not. Surprisingly, the owner of the vehicle thanked me.”

Although Harch said she would have rescued the dog regardless, having laws in place to protect citizens from liability in cases like this is an important step toward empowering people to act when they see an animal or child in distress. Senator James Manning, who sponsored the legislation in the Oregon Senate, spoke eloquently on the need for such laws and commended the Girl Scouts for getting involved:

“We should be doing everything we can to protect our most vulnerable, and that includes animals and children…I don’t care if somebody has to rip the door off a car; if that’s the only way they can rescue a child or an animal from potentially deadly harm, they should not be liable for property damage in those situations. They should be applauded as heroes. I also think that the local Girl Scouts who participated in the passage of this bill should be commended. For such a young group to be so committed to protecting other kids and animals who are placed in harmful situations – that is truly commendable.”

As reported by the Associated Press, Arizona Governor Doug Ducey echoed that sentiment earlier this year, where he said: “All it takes is a good Samaritan to save a life…The last thing we’d want is any Arizonan worried about breaking into that car to save a life. Send me a bill protecting the good Samaritans who save the lives of children and pets — and I’ll sign it.” And he did, in May 2017.

Not everyone agrees. According to the Arizona Capitol Times, Rep. Eddie Farnsworth, R-Gilbert, spoke out against Arizona’s legislation as “unnecessary” and complained that “worse yet, it puts the rescue of pets on the same level as rescue of children.” However, these laws are consistent with the social consensus – codified in cruelty and neglect laws – that abuse of both children and animals are social harms. Giving protections to one group does not take away protections from another, especially when these laws remove the exclusive burden on law enforcement and empower civilians to act in cases of imminent harm without fear of being sued or prosecuted. Although states may have a separate law on the books addressing children, many Good Samaritan hot car laws mention children (or “at-risk people,” as in Colorado’s law) alongside animals, highlighting the fact that companion animals, like children, are vulnerable members of society who deserve protection and sometimes need intervention when neglectful or simply uninformed guardians leave them unattended in potentially dangerous situations.

Yet, in lauding the extension of protections afforded to children to animals, we must remain mindful that these protections only extend to some animals – namely those defined as “pets.” Of the four Good Samaritan hot vehicles laws passed in 2017, all contain exemptions for farmed animals, despite the fact that cows, pigs, chickens, and other farmed animals suffer just as much in the heat as dogs and cats. The culturally constructed categories into which we place animals – such as “food” or “family” – do not take into account the physiological, cognitive, and emotional similarities that exist between these categories, but result in very different protections under the law. Most animal protection laws apply only to “domestic animals” and are written to expressly exclude “livestock.” Some laws use the broad term “animal” but then narrow it significantly; for example, Colorado’s law granting immunity to a person who renders assistance from a locked vehicle states: “’Animal’ means a dog or cat. The term ‘animal’ does not include livestock…”