The Animal Legal Defense Fund would never be able to use the law to advance the interests of animals without the support of legal professionals nationwide. In this continuing series of spotlights, ALDF’s Animal Law Program salutes attorney Morgan Hector. 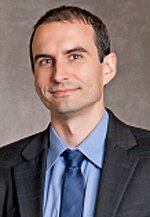 Animal law requires hard work, especially in cases that can continue for years. This is why the Animal Legal Defense Fund was so delighted to have Morgan Hector step aboard as a pro bono lawyer in our foie gras suit against the USDA.

After working with Holme, Roberts, and Owen, Morgan joined the firm Steptoe and Johnson. He was looking for a chance to work with other partners in the office. Lawrence Riff, a partner at Steptoe, has a relationship with the Animal Legal Defense Fund and brought Morgan onto our case against the USDA. In 2007, the Animal Legal Defense Fund submitted a petition to the USDA to get foie gras declared a diseased product unfit for human consumption.

Before this important suit, Morgan had never tried foie gras and didn’t know the details about the force-feeding in its production. Now that he does, he says that the fight to outlaw force-fed foie gras is a battle that must be waged on all fronts. “Public education is a huge part of this” he explains. He enjoys the challenge of dealing with animal law cases that have “a scientific bent–our case hinges on actual effect of force-feeding on birds, and the risks to people’s health from consuming it.” The Animal Legal Defense Fund, along with Morgan Hector, are also using scientific evidence that was before the USDA to fight the claim that ducks naturally gorge themselves in the wild in a manner comparable to force-feeding–or that ducks at foie gras farms supposedly show no signs of stress. The Animal Legal Defense Fund’s petition was denied in 2009; with Morgan’s help, the Animal Legal Defense Fund is in the process of challenging that action.

This is Morgan’s first animal law case, and he jumped into it with panache. Morgan has logged an incredible amount of pro bono work in other areas as well. He has put in over 700 hours in six years. His first year out of law school he worked a case representing a woman wrongfully evicted from her home, against a landlord who had been criminally prosecuted to the tune of 40 counts of fraud and wrongful eviction. Even as a fresh new lawyer, Morgan worked this case for months, and his client was awarded an excellent settlement.

An animal lover, Morgan grew up with two pugs and three cats. He’s had his fair share of companion animals, including a Maine Coon cat who weighed almost 19lbs. Morgan currently lives with his wife and two year old daughter in Los Angeles.