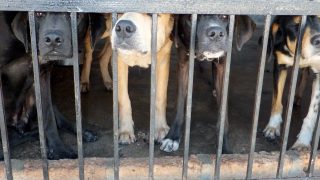 In sum, our investigator witnessed and recorded multiple, significant violations of the Animal Welfare Act. And still, in this heartbreaking setting, perfectly indicative of the operation’s priorities and motivations, Southern Roc’s representative offered to sell our investigator an Airedale puppy for $1,000.

Sadly, the state of Southern Roc’s facility are all too typical.

In fact, relative to other, larger puppy mills uncovered in the U.S., the conditions at Southern Roc’s operations are far from the worst. Contrary to common expectation, breeders in the US operate with little actual oversight or enforced regulation. Endorsements like “AKC registered” or “USDA licensed” mean next to nothing, especially about the quantity of dogs kenneled within an operation or about the quality of the care they receive after they enter the world.

While every major animal-advocacy and veterinary organization encourages adoption rather than purchase of companion animals, still more than one-fourth of dogs brought into American homes each year are purchased from breeders, most often as puppies.

This represents a huge for-profit market as well as an opportunity for unscrupulous breeders to operate puppy mills with little heed for the well being of their “products.” And because puppy mills routinely churn out unhealthy, miserable dogs, their dissatisfied buyers too often end up dumping those dogs into the nation’s overcrowded shelters.

The problem is egregious enough that over 100 cities and counties in the US have banned the retail sale of dogs and cats outright.

In this environment, Animal Legal Defense Fund is working to effect change on behalf of the Airedales at Southern Roc and, by extension, on behalf of all other dogs.

Animal Legal Defense Fund’s legal experts are working every day to ensure that our nations animal protection laws are enforced and when they’re not, we take action.

The passing of pet-store dog-and-cat sales bans in over 100 cities and counties nationwide suggests that, alongside us and common sense, history is on the side of stronger animal protection laws. Adoption and spay programs are gaining momentum while we’re working to ensure that laws that protect our animal companions are strong, and enforced.