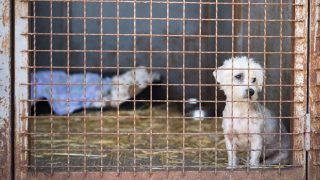 HARRISBURG, Pa. — In a victory for Pennsylvania’s puppy mill pooches, today a panel of judges found in favor of the Animal Legal Defense Fund in its lawsuit against the Pennsylvania Department of Agriculture. The opinion strikes down exemptions created by the agency to the 2008 amendments to the Pennsylvania Dog Law, which had allowed the cruel puppy mill industry to shirk the law. The decision restores the integrity of the law, a comprehensive set of requirements for commercial dog breeders.

The Pennsylvania Department of Agriculture, which is charged with administering and enforcing the Dog Law, eviscerated key elements of the law by issuing two broad exemptions for puppy mills. After exhausting other channels for challenging the exemptions, the Animal Legal Defense Fund sued to have them struck down.

Puppy mills have long been a blight on Pennsylvania. Such facilities treat puppies as cash crops instead of sentient animals, employing horrendous standards of care for the dogs and producing sick animals prone to illness, injury and genetic and behavioral problems. The Pennsylvania Dog Law sought to stop some of the most cruel and inhumane practices, like keeping mother dogs in cages with metal wirestrand flooring and never letting mother dogs outside for exercise. Being confined to wirestrand flooring is akin to exclusively walking on a suspended cage. Puppy mills use this as flooring so dog waste falls through the wire, making cleaning easier. For the dogs, it’s painful, hard to stand and walk on and causes serious paw injuries and deformations.

The Pennsylvania Dog Law banned wirestrand flooring in primary enclosures for dogs over 12 weeks of age, and required “unfettered access” to an outside exercise area for dogs over 12 weeks of age. Bowing to pressure from the puppy mill industry, the Pennsylvania Department of Agriculture passed a regulation allowing puppy mills to keep nursing mothers with puppies in enclosures with up to 50% metal wirestrand flooring. Then issued a “policy statement” that the agency would not enforce the exercise requirement against puppy mills if they provided nursing mothers with puppies access to an exercise area at least once a day.

The panel of three appellate judges agreed with the Animal Legal Defense Fund and held that the Department’s regulation on wirestrand flooring and its “daily exercise” policy were both contrary to the clear purpose and intent of the Pennsylvania Dog Law and therefore were unlawful. Today’s decision struck down both exemptions.