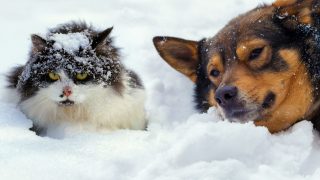 It is not uncommon for dogs and cats left outdoors in the brutal cold to suffer severe frostbite or even to freeze to death. Some areas, like North Dakota and Minnesota, have recorded temperatures as low as 40 degrees below zero. The Animal Legal Defense Fund is frequently contacted regarding animal cruelty charges filed against people who have left animals out in the cold.

Public scrutiny and law enforcement are our best tools to enforce animal cruelty laws, and that is why we make exposing such neglect—like leaving dogs outdoors to freeze to death—a priority and make sure violators of these laws are held accountable.

What the Law Says

State laws differ dramatically when it comes to defining the standards of care required for animals. By defining the term “animal” to exclude entire classes of sentient beings we see a huge variation in the scope and efficacy of the law. Compare Iowa law (defining an “animal” as a “nonhuman vertebrate” but then going on to exclude livestock and any game or fur-bearing animals from that same definition) with Illinois law (defining an animal as “[E]very living creature, domestic or wild, but does not include man”).

Further, some states fail to expressly include a requirement to provide adequate “shelter” as an element of the crime of animal neglect. Nebraska, New Mexico, and New York are guilty of this omission. These antiquated, ambiguous, or poorly drafted statutes shift the onus to the courts to insert some basic common sense into the analysis.

One thing is certain: it is illegal to cause a companion animal to freeze to death.

The Animal Legal Defense Fund receives many letters and phone calls from outraged citizens concerned about animals left out in the cold in their area. While prosecution of these offenders is generally left to the discretion of the USDA or local law enforcement and prosecutors, the Animal Legal Defense Fund provides direct support and training to law enforcement and prosecutors in the handling of such cases, including financing forensic investigations, locating and funding essential expert witnesses, doing research and writing briefs, and even making appearances on behalf of prosecutors in court. These services—and your voice and support—are often the primary factor in whether a case is prosecuted at all.

Safety tips: the best way to keep companion animals from freezing to death is to bring them indoors,where it is warm.

Resources: Check out our compendium of Animal Protection Laws in the U.S. and Canada to see where your state falls on laws regarding animal neglect and abuse.