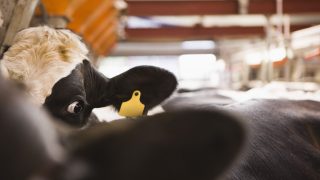 LOS ANGELES — On the heels of an undercover investigation of a Southern California dairy farm, Emmy-nominated actress and animal advocate, Kate Mara, joined forces with the Animal Legal Defense Fund to announce the organization’s lawsuit against the dairy and its management for violating state and local animal protection laws.

In the video, Mara details the cruelty caught on video by Animal Outlook at Dick Van Dam Dairy – a Dairy Farmers of America supplier that produces products including DairyPure and TruMoo brand milks – warning viewers of “cruelty so vicious” they “may need to look away.”

“The dairy industry is riddled with standard industry practices that go against our values,” says Mara. “Cows living in filth, being repeatedly impregnated, suffering painful infections of their mammary glands, and having their calves taken away at birth. But the depraved violence inflicted upon the cows at Dick Van Dam Dairy distinguishes this company as exceptionally savage and it should not be in operation.”

“The actions captured at Dick Van Dam Dairy are not isolated incidents or the result of a few bad actors, but a culture of abuse,” says Animal Legal Defense Fund Executive Director Stephen Wells. “It’s critical the public has a window into the dairy industry — and demand change. It is our intention to hold Dick Van Dam Dairy and its management accountable.”

The undercover video documents the following: