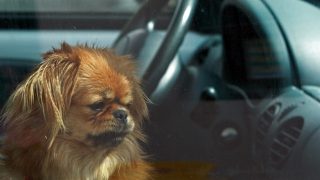 Indiana’s new law, which goes into effect July 1, is stronger than many hot car laws in that it allows a regular citizen (as opposed to only law enforcement) to break into a car to rescue an animal, yet it is significantly weakened by not providing full immunity from civil and criminal liability, unlike the other eight laws that allow citizens to act. Instead, under Indiana’s law, a person who breaks into a vehicle to remove an animal in distress is required to pay for half of the repair costs directly caused by the forcible entry.

The only exception to having to pay for half of the damage would be if the owner of the vehicle agrees to pay for all of the repair costs or if the “good Samaritan” is acting in the scope of their employment as a law enforcement officer, firefighter, government officer or public safety employee, emergency responder, animal control officer, or veterinary professional.

Besides the cost-of-repairs provision, the law grants immunity from all other civil and criminal liability provided the person:

State Representative Tony Cook, who sponsored HB 1085, presented in a press release the scope of the problem regarding dogs left in hot cars, and why this legislation was necessary:

“There are about 13,600 community animal shelters and control agencies nationwide and they receive at least one to two calls per day reporting pets left in hot cars. That amounts to 13,600 to 27,200 pets being neglected in unattended cars every day. That does not include the number of 911 calls that police departments receive across the country. I hear of these stories and I want to help people who remove pets from these careless situations.

According to the director of Fort Wayne Animal Care and Control, there were 269 calls received for dogs being left in vehicles from May 1 through Sept. 30, 2016. In addition, nearly half of the animal-neglect calls were in response to animals left inside a car. The average interior temperature of these vehicles were between 90 and 130 degrees, and an officer’s average response time ranged from five to 20 minutes.”

Rep. Cook continued, “It is important that Hoosiers are not punished for doing the right thing and stepping up to rescue animals from enduring terrible suffering.” However, it is likely that having to pay for half the repair costs will indeed be seen as “punishment” by would-be rescuers—or at least a deterrent. Although this provision appears to be a compromise from an earlier version of the bill in which the person would be on the hook for the total cost of repairs, having to pay for vehicle damage will almost certainly dissuade would-be rescuers from helping an animal in distress. The rationale given for adding this provision was that it would deter potential thieves who would use the law as a cover for breaking into a vehicle to steal something.

Shortcomings of Indiana’s law aside, legislation addressing dogs in hot cars has been gaining momentum. Twenty-nine states currently have statutes that either prohibit leaving an animal confined in a hot vehicle or protect a person—law enforcement or civilian— who rescues an animal from a vehicle from being sued under certain conditions. Several of these laws have been passed within the last few years as public concern has mounted about this issue. Regardless of whether a state has a “hot cars” law on the books, an owner could still potentially be charged under that state’s general animal neglect law.

While there is a cause to be optimistic about this legislative trend and the further protection it provides to companion animals, unsurprisingly, Indiana’s law only applies to “domestic animals” (defined as a dog, cat or other vertebrate animal that is domesticated and kept, or intended to be kept, as a household pet). It expressly exempts “livestock” animals (a term that is so expansive under Indiana law that it includes rabbits and “birds of the avian species”), who do not receive the care and concern under this law that animals defined as “domestic animals” do.

In contrast to the recent spate of legislation designed to protect companion animals trapped in hot cars, a Canadian advocate was recently acquitted of criminal mischief charges for offering water to farmed animals confined in a hot truck. This trial, which spawned the slogan “Compassion is Not a Crime,” highlights the stark contrast between what is considered lawful treatment of animals classified as “food” versus those classified as “companions.” Though pigs and dogs are biologically similar, and pigs have been shown to outperform dogs on cognitive tests, the cultural category in which we place them results in very different protections under the law.

You can help spread the word about dogs in hot cars with the Animal Legal Defense Fund’s sunshade.