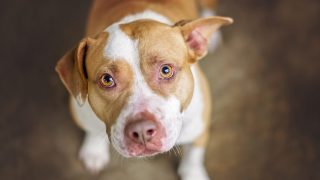 When Guam enacted a felony animal cruelty law in 2011, the U.S. territory moved up 18 places on the Animal Legal Defense Fund’s Animal Protection Laws State Rankings, showing the second most improvement of U.S. states and territories that year[1].

In 2018, a grand jury in Guam indicted Melchor Antolin for what is believed to be the island’s first charges of felony animal cruelty arising from willful neglect. The case involves a pit bull named Thor. Thor was found by animal control authorities chained up and with a 15-pound tumor the size of a basketball in his leg. Thor’s untreated medical condition was so severe that he had to be euthanized.

Although Guam’s felony law has been utilized in cases of physical violence toward animals, this is believed to be the first time the law was applied due to neglect, or a failure to provide minimum care. Antolin’s trial is scheduled for April 2019.

According to Cyrus Luhr of the nonprofit Guam Animals in Need: “This is a very important case for Guam. If you purposefully hurt an animal, whether through physical violence or neglect, the law is clear — animal cruelty is animal cruelty.”