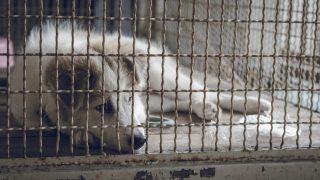 Florida: Urge Your Legislators to Protect Dogs, Not the Puppy Mill Industry!

Right now in Florida, a bill is pending in the State Legislature that would stall the progress municipalities have made in protecting companion animals from the cruel conditions of the commercial pet breeding industry.

Almost 70 local governments in Florida have passed laws to ban the retail sale of puppies that come from cruel puppy mills. Dogs in puppy mills suffer immensely — they often live in barren, filthy conditions with no access to veterinary care, regular exercise, or socialization. Infection and life-long health problems are common among puppies raised in these conditions. There is no question that the  commercial pet breeding industry prioritizes profit over the well-being of dogs.

S.B. 1698 is a dangerous preemption bill that would nullify existing puppy mill sales bans and block Florida municipalities from enacting similar laws to protect dogs in the future. This is an attack on local governments and on animal protection. Please email your state representative urging them to oppose S.B. 1698.