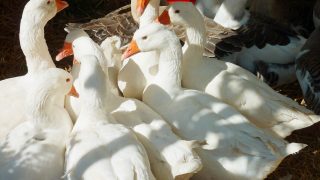 On Dec. 14, 2016, a federal judge granted summary judgment to the U.S. Department of Agriculture (USDA) in a lawsuit brought by the Animal Legal Defense Fund, Compassion Over Killing, Farm Sanctuary, the Animal Protection and Rescue League and three individuals to compel the agency to declare foie gras a diseased product unsuitable for human consumption, thereby removing it from the food supply.

Foie gras is produced by force-feeding geese and ducks until their livers swell to be many times their normal size, creating the “fatty liver” prized by gourmands unconcerned with the animal suffering necessary to obtain this product. The practice of force-feeding is not only cruel but also purposely induces liver disease, hepatic lipidosis, in birds victimized by the foie gras industry.

Because the federal Poultry Products Inspection Act (PPIA) requires that diseased birds be removed from the food supply, the Animal Legal Defense Fund and others in 2007 submitted a petition for rulemaking to the Food Safety and Inspection Service (FSIS)—the division of USDA charged with ensuring poultry products entering the nation’s food supply are safe, wholesome and correctly labeled—arguing that foie gras is an adulterated and diseased product that is “unsound, unhealthful, unwholesome, or otherwise unfit for human food.” 21 U.S.C. § 453(g)(3).

The petition also alleged that foie gras consumption can trigger secondary amyloidosis in people with chronic inflammatory diseases, such as rheumatoid arthritis.

The FSIS denied this petition in 2009, prompting plaintiffs to file a lawsuit alleging that action was arbitrary, capricious and contrary to law. The case was dismissed in March 2013 for lack of subject matter jurisdiction, but the Ninth Circuit Court of Appeals reversed in December 2015, finding that the agency’s decision not to initiate rulemaking was reviewable under the Administrative Procedures Act (APA).

On the first two points, although the individual plaintiffs were found to lack standing to sue, the animal protection groups were granted organizational standing, as explained below. On the “zone of interests” question, the USDA had argued the groups’ interests in the treatment of birds raised for foie gras did not fall within the statutory purposes of the PPIA.

The judge disagreed, finding the organizational interests of the animal protection groups were broader, and did fall within the “zone of interests” protected by the PPIA.

The court also held that the animal protection groups had standing. Standing—or the right to bring a lawsuit to court—is a perennial challenge to those attempting to advocate for animals within the legal system. To clear the hurdle of standing, individuals and organizations must show they themselves have suffered an injury; because of their legal status as property, showing an animal has been injured is not enough.

The animal protection groups in this case asserted only the second type of standing, and needed to show that the government’s actions frustrated their mission, and that they spent resources counteracting that frustration. The court concluded that the Animal Legal Defense Fund (and thus the other organizational co-plaintiffs) met both requirements because:

“Animal Legal Defense Fund’s mission is to prevent animal cruelty, which includes eradicating the practice of force-feeding poultry… FSIS frustrated Animal Legal Defense Fund’s mission by declining to initiate rulemaking that would ban force-fed foie gras from the food supply in the United States, which in turn would have dramatically reduced the market for force-fed poultry.

This forced Animal Legal Defense Fund to continue expending resources to counteract the practice, including writing press releases and initiating letter-writing campaigns to educate the public about the danger to both human and animal health of force-feeding poultry, and filing other administrative petitions aimed at banning the practice.”

On the merits, however, the judge disagreed with the animal protection groups’ claim that the agency’s denial of their petition was arbitrary, a decision that is consistent with the broad deference typically given to agencies by the courts in cases brought under the APA.

The ruling hinged on the interpretation of the science brought to bear, with the government arguing a qualitative distinction between fatty livers caused by disease and livers fattened by force-feeding, with only the former being unfit for human consumption.

Plaintiffs argued this was not a scientifically valid distinction but the judge ruled he must defer to the agency’s scientific conclusions, especially if they are not completely implausible; he also found lack of sufficient evidence for plaintiffs’ claim of a connection between consumption of foie gras and onset of secondary amyloidosis.

Animal agriculture is not a gentle industry, but foie gras has come under special scrutiny for its egregiously inhumane production methods. California banned foie gras in 2004 with the passage of a law prohibiting force-feeding of birds as well as sales of products obtained from this practice. The law had an eight-year phase-in period and came into effect in 2012. In 2015, following industry attempts to overturn the ban, enforcement of the sales portion was enjoined on preemption grounds. That case is currently on appeal and oral arguments were heard in December 2016.

Although foie gras can currently be sold in California, pending the appeals court decision, it still cannot be produced in the state. Foie gras production is also illegal in Australia, Argentina, Israel and several European countries, including Germany and the UK. In 2014, India became the first country to ban the import of foie gras.