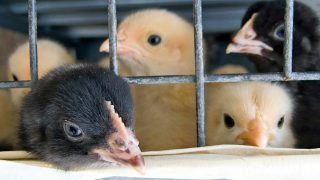 On November 17, 2016, the Ninth Circuit Court of Appeals upheld a lower court’s dismissal of a lawsuit challenging California’s ban on the sale of shell eggs obtained from sources that do not comply with its animal care standards.

California voters passed Proposition 2, or the Prevention of Farm Animal Cruelty Act, in 2008, which prohibits the confinement of farmed animals in spaces so small they cannot turn around freely, lie down, stand up and fully extend their limbs. Most egg-laying hens cannot do that in “battery cages,” the cramped and tiny cages that have become industry standard and are outlawed by the new law.

Proposition 2 did not originally apply to out-of-state egg producers, which at the time supplied almost half of the eggs consumed in California. The California legislature passed AB 1437 in 2010 as an accessory bill mandating that eggs sold in California must be produced in compliance with Proposition 2, regardless of state of origin. Both laws came into effect on Jan. 1, 2015, giving California producers seven years, and out-of-state producers five years, to transition to alternate housing systems for their hens.

In March 2014, through their attorneys general or governors, six states – Missouri, Nebraska, Oklahoma, Alabama, Kentucky and Iowa – filed suit, arguing provisions in California’s law violated the Commerce and Supremacy Clauses of the U.S. Constitution. The Animal Legal Defense Fund, along with Farm Sanctuary and Compassion Over Killing, filed an [term word=”amicus brief” in support of California’s motion to dismiss, which the lower court granted, ruling the six states lacked parens patriae standing to challenge the constitutionality of California’s law. The plaintiff states appealed the decision, but it was affirmed by the Court of Appeals on Nov. 17, 2016.

Parens patriae, Latin for “parent of the country,” is a doctrine that allows states to step in and act on behalf of those who are legally unable to act on their own behalf. It has most often been used to advocate for children and mentally ill or incompetent citizens, but may also be invoked by states to protect the interests of its people and the general economy of the state.

The states’ standing argument rested on the claim that their “quasi-sovereign interest in the economic well-being of their people” had been harmed. They also argued that their citizens had been excluded from the benefits that flow from participating in the federal system because egg producers in their states would be forced to spend millions of dollars to comply with the regulations or be closed out of California’s huge market. A three-judge panel unanimously rejected this argument, ruling that the states failed to show how the law would affect their citizens and not just individual egg farmers, and that any future economic harm to their citizens was speculative.

This is not the first time Proposition 2 has been challenged, but thus far it has survived attempts to overturn it.

Last year, the U.S. Court of Appeals for the Ninth Circuit upheld the law’s constitutionality in the face of a claim that its standards were too vague and therefore impossible to reasonably implement because it did not specify exact dimensions for chicken housing. The court disagreed, finding that enough room to spread their wings and turn around was specific enough.

The Ninth Circuit’s Nov. 17 decision comes just after Massachusetts voters overwhelmingly approved Question 3, which outlaws the same confinement practices that are banned in California—including battery cages, gestation crates for pregnant pigs, and veal crates for calves—but goes further in also banning the sale of eggs and all meat products obtained from animals raised in these conditions (including outside the state).

While laws that prohibit keeping animals in tiny cramped cages may seem like a minimal step forward, these bans on specific industry practices represent some of the strongest laws that currently exist in the U.S. to prevent long-term physical and psychological suffering in animals raised for food.

There are no federal laws that govern the conditions in which farmed animals are raised, and extreme confinement has become the norm in modern animal agriculture.

The most intensive forms of confinement affect breeding pigs, egg-laying chickens and calves raised for veal – all three of whom were covered by prohibitions enacted in Proposition 2 and Question 3. One or more of these forms of confinement have been banned in other states as well, but California and Massachusetts now have the most comprehensive laws that address farmed animal housing standards; banning not only cruel confinement practices but also sales of products obtained from these practices (even if produced out-of-state) gives these laws a much wider reach.