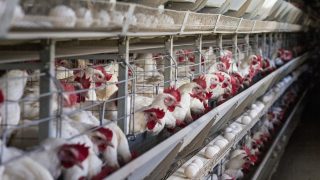 LOS ANGELES — The United States District Court for the Northern District of California granted a motion for summary judgement to the Animal Legal Defense Fund that orders the U.S. Food and Drug Administration (FDA) to publicly disclose critical information about factory egg farms from a Freedom of Information Act (FOIA) request. The ruling uncovers additional details that were previously redacted including cage rows, number of cage tiers, and number of cage floors per hen house on top of data obtained previously in the case that will help give the public a better sense of the overcrowded and unsanitary conditions that FDA allows to fester on factory egg farms.

Due to the factory farming industry’s efforts to shroud its practices in secrecy, FOIA is critical to understand industry conditions and government law enforcement. FOIA’s Exemption 4, which authorizes the government to withhold confidential commercial information, is frequently used by agencies to withhold important information about industries that exploit animals. The Animal Legal Defense Fund’s many victories in this case have set legal precedent that will empower the public to better understand what the government is doing to protect animals and public safety in the factory farm industry.

“The cruel practices of factory farming are kept from the public so consumers are left in the dark about the treatment of the animals involved in industrial agriculture,” said Animal Legal Defense Fund Executive Director Stephen Wells. “While it took a decade to get information on animals that the public has a right to see, we are pleased that the court ruled in our favor and that we can finally examine data that the industry has tried desperately to keep from coming to light.”

The public relies on transparency in order to expose illegal, cruel and dangerous practices on factory farms and slaughterhouses. Hens used by the egg industry are among the most intensively-farmed animals in the country, making it critically important that overcrowding information in the FDA’s Egg Safety Rule records not be suppressed.