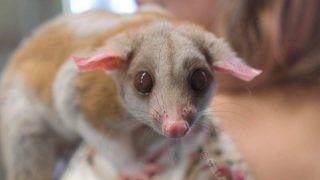 WASHINGTON, D.C. — Today, the Animal Legal Defense Fund filed a complaint with the U.S. Department of Agriculture (USDA) Animal and Plant Health Inspection Service (APHIS) to demand enforcement of the Animal Welfare Act (AWA) where users on YouTube, TikTok, and other social media platforms exhibit animals without proper licensing. The complaint cites prolific online exhibitors residing in Florida, Ohio, and Texas, including Jacob Feder, ‘Rico Exotic,’ ‘CatAleah,’ and Taylor Nicole Dean, all of whom exhibit private collections of animals to millions of people for hefty sums of money, without required APHIS oversight. The complaint asks APHIS to prohibit the social media personalities from exhibiting animals unless and until they receive AWA licenses and comply with minimum standards outlined in the law for animal welfare standards.

The AWA requires that individuals who exhibit a certain number of warm-blooded animals for compensation to be licensed. The licensing process requires individuals to subject themselves to an inspection by APHIS to determine whether they comply with AWA regulations, which include adequate veterinary care and species-specific standards for enclosure type, species separation, sanitation, water access, and diet. However, many individuals are currently exhibiting across social media platforms, for millions of viewers and compensation, without accountability for the treatment of animals.

Jacob Feder, Rico Exotic, CatALeah, and Taylor Nicole Dean currently each exhibit their animals to between 1.5 million to 2.5 million followers and subscribers on their largest social media accounts. With followings of this size, these exhibitors can earn substantial, continuous revenues through advertisements, brand endorsements, platform creator funds, and direct payments from their viewers and supporters. The lack of oversight has led to a variety of welfare issues revealed in the exhibitors’ posted videos, including poor and inappropriate living conditions such as inadequate enclosures and incompatible groupings, inadequate veterinary care, and improper handling of the animals for entertainment purposes.

The exhibitors described in the Animal Legal Defense Fund’s complaint post videos with animals in dangerous conditions, including:

“With every technological development a new form of animal exploitation emerges—and social media is no different,” says Animal Legal Defense Fund Executive Director Stephen Wells. “APHIS has a statutory obligation to enforce compliance with the licensing requirements of animal exhibitors — on and offline.”

In the U.S. government’s high-profile case against Jeff Lowe of “Tiger King” — who is a former business partner of Joe Exotic — a federal court has recently issued several opinions making clear that exhibiting animals on social media is an activity governed by the AWA. The Animal Legal Defense Fund’s complaint to APHIS demands the agency to follow these decisions by requiring all individuals on social media who meet the AWA definition of “exhibitor” to become licensed and comply with AWA standards.