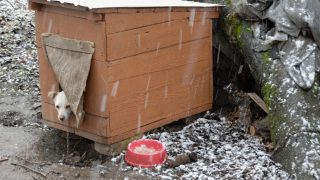 With temperatures regularly dipping below the teens, the outdoors is no place for a dog.

In Alexandria, New Hampshire, twenty-two German shepherds have been seized after being neglected in freezing temperatures — with “backyard breeder” Jennifer Choate facing 22 counts of animal cruelty.

In North Carolina, a 35-day-old puppy almost met her fate. The single puppy was found abandoned behind an animal shelter — curled up in a ball, shivering — two hours after the shelter closed. If Donut hadn’t been found, she probably would not have survived the night.

Other dogs across the country have not been so lucky. Reports of dogs freezing to death in low temperatures have plagued the news.

In Hartford, Connecticut a concerned neighbor called the police. When officers arrived… it was too late. A young pit-bull terrier mix was found frozen to death chained outside. He was lying in his own frozen feces. Michelle Bennett has been charged with animal cruelty  – prosecutors and animal advocates are fighting to elevate this charge from a misdemeanor to a felony.

In Toledo, Ohio, an American bulldog was found frozen to death on a porch. Locked outside, Nana’s body slowly succumbed… and she froze to death. Another dog, Haze, was found inside. His ribcage exposed due to malnourishment, he stood shivering as he was rescued. The owner has since been charged with felony animal cruelty.

In Detroit, Michigan, a Pomeranian mix dog was left in a carrier outside a Detroit rescue office. Trapped, she had no way to even try to keep warm and died. It was so cold, fleas were frozen to her.

In Knox County, Illinois, eight newborn puppies lost their lives to the freezing temperatures. A mother dog was locked outside — as she always was — but this night she gave birth. Only the mother and one puppy survived.

There is no question — this is animal cruelty.

The Animal Legal Defense Fund has been contacted about numerous neglect cases this winter — of dogs left outside to die in subzero temperatures. Our expert animal cruelty attorneys are working closely with local police and prosecutors’ offices to get neglected and abused animals the justice they deserve.

Your support today allows our expert attorneys to help animals neglected and left in the cold, or abused, get the justice they deserve.

In addition to our responsive criminal justice efforts, we are actively issuing warnings to regions stricken with inclement weather — alerting residents to the fact that allowing animals to suffer or die in the cold is not only unconscionable, it’s a crime that might include jail time — and urging that cats and dogs be brought inside and that appropriate shelter is available for larger animals.

With your support, our attorneys help law enforcement assure justice is served when animals are harmed or killed due to human neglect and abuse.