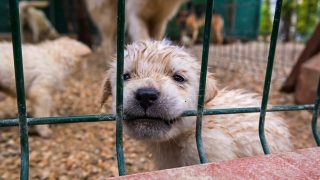 Across the country, cities and counties are taking a stand against the cruel puppy mill industry by adopting retail pet sale bans. Puppy mills are breeding facilities in which the maximization of profit is prioritized over the well-being of the dogs. These laws make it illegal for pet stores to sell dogs and cats (and sometimes additional animals) sourced from large-scale commercial breeders, and instead require them to offer animals available for adoption from rescues and animals shelters. In 2017, California made history when it enacted AB 485, the first state law to prohibit pet stores from selling commercially-bred animals. While California is the first state to enact a retail pet sale ban, hundreds of cities and counties, including Cook County (Chicago) and Philadelphia, have adopted similar ordinances.

In response, pet store lobbyists are pressuring state legislatures to pass preemption laws blocking cities’ and counties’ right to adopt retail pet sale bans. Passing preemption laws at the state level is a common tactic employed by lobbyists to impede local laws.  When a local law conflicts with a state law, the state law preempts (or takes precedence over) the local law. Pet store lobbyists claim these laws are necessary to ensure there are uniform laws across a state. In reality, puppy mill preemption laws simply rob cities and counties of the ability to pass laws their residents want.

Despite vigorous opposition from animal advocates, both Arizona and Ohio passed laws undercutting the power of cities and counties to prohibit the retail sale of puppies. Ohio Governor John Kasich signed Senate Bill 331, dubbed the “Petland Bill,” into law on December 19, 2016. As the name suggests, Petland was the driving force behind SB 331. At the time of its passage, several Ohio communities, Toledo and Grove City, had adopted laws that required pet stores to offer only puppies from animal shelters or rescue organizations. Ohio Democratic Party Chairman David Pepper lamented the decision, stating, “This bill was a last-minute sneak attack on Ohio voters, citizens, and communities that are taking action to improve their economic fortunes, protect their quality of life, and crack down on horrific abuses against animals.”

And in Arizona, Governor Doug Ducey signed a similar preemption bill in May 2016. Defending his decision, Governor Ducey wrote that the law “ensures puppies being sold in pet shops are coming from responsible breeders” in a public letter. Despite Governor Ducey’s claims, the Arizona law did little to protect consumers or puppies from unscrupulous pet stores. Less than a year later, the United States Department of Agriculture (USDA) information blackout further weakened the already weak law.

Both the Arizona and Ohio preemption laws suggest that breeders licensed by the USDA are somehow distinct from puppy mills. But the reality is that many puppy mills are USDA licensed. At the federal level, breeders are regulated by the Animal Welfare Act (AWA), a law that outlines basic care requirements for the millions of animals living in roadside zoos, puppy mills, and research labs across the country. But the standards for a breeder to be a “USDA-licensed” facility are minimal and many breeders with USDA licenses still have hundreds of dogs on a relatively small property, living in wire cages with little human interaction.  Moreover, the USDA has an abysmal track record when it comes to ensuring facilities meet even the most basic AWA requirements.

And even when AWA violations are found, they rarely result in license revocation. Instead, the USDA issues warnings or negligible fines, or takes no action at all. That could change in the future. Thanks to a lawsuit filed by the Animal Legal Defense Fund, the U.S. Court of Appeals for the District of Columbia recently ruled that the USDA can no longer rubberstamp license renewals for facilities it knows are violating the AWA. But presently, thousands of puppy mills remain licensed.

Worsening the situation, in February 2017, the USDA removed public access to thousands of animal welfare records related to the AWA. The removal of these databases added an additional wrinkle to preemption laws. The Ohio law is predicated on the ability of consumers and local authorities to confirm whether pet stores are sourcing their puppies from breeders without USDA violations. Specifically, the law forces cities to allow pet stores to sell puppies from “qualified breeders.” The statutory definition of “qualified breeder” excludes, in part, breeders with certain kinds of violations from the USDA within the last three years.

But when the USDA removed the databases, animal advocates, local governments, and consumers lost this ability. Today the Ohio law is virtually unenforceable, enabling pet stores to sell puppies from breeders regardless of their track record without fear of repercussion. The Arizona law was similarly undermined by the removal of the databases. In a concession to animal advocates, the Arizona preemption bill included a disclosure requirement – stores must label each animal’s cage with information about the breeder, including the USDA license number. Upon the removal of the online databases, these requirements became largely useless.

Preemption Bills Defeated in the 2018 Florida and Georgia Legislative Sessions

This year, efforts to pass preemption bills in the Florida and Georgia legislatures failed. Similar efforts in Tennessee and Illinois also failed in 2017.  Near the end of the 2018 Florida legislative session, pet store lobbyists snuck language into a tax bill, HB 7087, that would have voided retail pet sale bans in 58 Florida cities and counties and prohibited future ordinances.

The Animal Legal Defense Fund worked with professionals in Tallahassee and rallied Florida residents to defeat the bill. It was ultimately amended to remove the preemption language prior to becoming final. Then just days before the session ended, Representative Halsey Beshears, R-Monticello, introduced a similar amendment to an agricultural bill. Facing opposition once again from the Animal Legal Defense Fund and the Florida Association of Counties, Representative Beshears withdrew the amendment later that same day.

Legislators in Georgia went a step further and introduced bills, SB 418 and HB 948, that would have prohibited cities and countries from regulating the sale of any goods also regulated by the Georgia Department of Agriculture, the USDA, and the Food and Drug of Administration. The bill provoked significant outcry from advocates and while the Senate bill received a floor vote, both bills ultimately died.

Retail pet sale bans are a powerful way for people to fight puppy mills in their own communities. Preemption laws wrongly infringe on local governments’ ability to protect their residents and animals. Instead of passing preemption laws, states should ban the sale of commercially-bred animals statewide. In 2018 alone, at least six state legislatures (Maryland, Massachusetts, Nebraska, New York, Oregon, and Pennsylvania) are considering such legislation. It is almost assured more states will follow suit in the future.