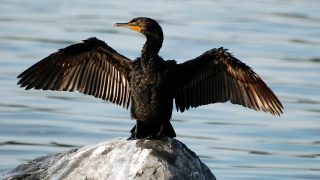 Army Corps to Blow Cormorants Out of the Sky—Can You Help?

On Friday, March 20, the Army Corps of Engineers announced its final decision to go forward with a “management plan” that calls for the slaughter of nearly 11,000 double-crested cormorants and the destruction of over 26,000 cormorant nests on East Sand Island, at the mouth of the Pacific Northwest’s Columbia River. The Audubon Society of Portland has been tracking this lethal control plan since it was first announced, commenting during the environmental review, spreading the word, and mobilizing bird lovers to speak out against it.

If you are a lover of the Columbia River’s birds, the Animal Legal Defense Fund needs your help in putting a stop to this slaughter.

The cormorants will be blown out of the sky with shotguns and shot at close range with rifles as they glide over the water, gathering food for their hatchlings on the island. All told, the federal government’s plan calls for mowing down more than half of East Sand Island’s cormorants—the largest colony of these birds in the western United States. This represents the killing of 15% of the entire population west of the Rockies.

The Corps’ plan is a misguided and scientifically suspect attempt to mitigate the precipitous decline of protected salmon species in the region. Rather than attack the root causes of salmon loss—habitat loss, over development, and the Corps’ own management of the Columbia River Hydropower System—the federal government has scapegoated the birds for doing what comes naturally: eating fish.

During the environmental review process, the Corps received over 145,000 comments opposing its lethal management plan, with over 98% of commenters voicing opposition to lethal control. ALDF joined this chorus, calling on the Corps to thoroughly analyze the panoply of human-caused impacts on salmon populations, and to engage in a bioethical review of how to manage the bird and fish species.

However, despite this overwhelming public opposition, and the lack of any scientific basis for the hypothesis that blasting cormorants out of the sky will lead salmon populations to rebound, the Corps’ lethal management plan is moving forward. Their narrow-minded calculation pits one protected species against another in a zero-sum game. That’s not conservation; it’s a massacre.

The Animal Legal Defense Fund is calling for the planned slaughter of cormorants to be halted—and we need your help to hold the Corps accountable.