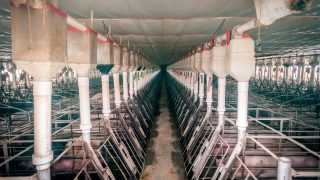 TOPEKA, Kan. – Today the United States Court of Appeals for the Tenth Circuit affirmed a ruling by a lower court striking down Kansas’s “Ag-Gag” law for violating the First Amendment. The lawsuit was filed in 2018 by a coalition of animal, environmental, and food safety advocacy groups challenging the law’s constitutionality.

In today’s decision, the Court of Appeals upheld the lower court’s decisions finding the law unconstitutional and granting the plaintiffs a permanent injunction, thus barring the state from enforcing the Ag-Gag law. The court’s decision held that the three provisions of the Kansas Ag-Gag law at issue targeted speech, not merely conduct, because they regulate what may be permissibly said to gain access to animal agriculture facilities.

The court held that Kansas may not legislate speech in order to silence views critical of animal agriculture. The court’s decision affirms that videos, articles, advocacy, and public dialogue generated by whistleblowing and undercover investigations of factory farms and slaughterhouses relate to a matter of public concern: The treatment of animals on farms and manner in which food is produced. Such speech lies at the core of the First Amendment.

“Kansas has hindered the ability of whistleblowers to expose inhumane conditions associated with factory farms for more than three decades while infringing on First Amendment rights,” says Animal Legal Defense Fund Executive Director Stephen Wells. “The Tenth Circuit’s decision is a victory for animals throughout the state who are forced into industrial animal agriculture and suffer in secret, behind closed doors.”

“Today’s Tenth Circuit decision is a big victory for free speech, for transparency in the animal agriculture industry, and for animals,” says Alan Chen, lead counsel for the Plaintiffs and Thompson G. Marsh Law Alumni Professor of Law at the University of Denver Sturm College of Law. “Undercover investigations are crucial to keeping people informed about the frequently inhumane conditions in which these animals are kept.”

Enacted in 1990, the Kansas Ag-Gag law was the oldest in the United States. Kansas is a major agricultural producer with the third-most cows of any state, and until being struck down, its Ag-Gag law had successfully prevented whistleblowers from investigating the conditions that millions of pigs, cows, and chickens endure.

There are nine lawsuits challenging state Ag-Gag laws around the country. Earlier lawsuits have resulted in courts striking down similar laws or portions of laws in Iowa, North Carolina, Idaho, Utah, and Wyoming. The Eighth Circuit Court of Appeals last week cleared the way for an Animal Legal Defense Fund-led coalition’s lawsuit challenging the Arkansas law to proceed, while a decision concerning the North Carolina law is pending in the Fourth Circuit Court of Appeals.

The Kansas coalition is comprised of the Animal Legal Defense Fund, the Center for Food Safety, and state farmed animal organizations Shy 38, Inc. and Hope Sanctuary. The coalition is represented by Public Justice, leading First Amendment scholars, the law firm Foley & Mansfield, and attorneys with the plaintiff organizations.