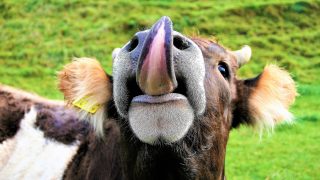 SAN FRANCISCO – The Animal Legal Defense Fund, People for the Ethical Treatment of Animals (PETA) and Compassion Over Killing (COK), representing more than 6 million members and supporters, have submitted a joint comment today, as the comment period closes, to the U.S. Department of Agriculture’s Food Safety and Inspection Service (FSIS) sharply criticizing the agency’s “Labeling Guideline on Documentation Needed to Substantiate Animal Raising Claims for Label Submissions,” released in September. Feedback so far has been overwhelmingly critical, and today’s joint comment from the animal protection coalition leads the outcry.

The comment argues that FSIS’ Guideline violates the law by enabling—even encouraging—rampant consumer deception. Instead of defining a baseline standard for commonly used consumer-attracting animal product labels, like “humane,” “free-range,” and “raised without antibiotics,” the Guideline allows each company to define the terms based on their own interpretation and their internal company policies—and doesn’t even require that these policies be made public. This creates confusion and inconsistency for consumers across the market, and an open invitation for companies to mislead customers who have a reasonable expectation of what certain terms and claims mean.

The Guideline effectively renders any and all animal raising claims meaningless. It allows producers that use standard, industrial production methods to make “humane” or “animal-friendly” claims, while hindering producers that have actually instituted strict standards that come closer to satisfying consumer expectations and likely misleading the large percentage of conscious consumers who are willing to pay extra for products they believe are raised more humanely.

“Without any authority to go onto farms to see for itself how animals are being treated,” says Jared Goodman, the PETA Foundation’s Director of Animal Law, “the USDA has all but guaranteed that it will continue to approve ‘humane’ labels where portions of birds’ beaks and pigs’ tails are cut off and animals live their entire lives indoors without enrichment before being roughly rounded up and loaded onto a truck for a terrifying transportation to a violent death.”

“FSIS is taking a step in the wrong direction with this Guideline, which violates the agency’s own statutory mandates and allows producers to use inconsistent claims that will mislead consumers who care about animal welfare,” says Cheryl Leahy, General Counsel for Compassion Over Killing.

The comment is just one voice in a loud outcry against the USDA’s label giveaway to the animal slaughter and by-product industry. An online petition from PETA has garnered more than 36,000 signatures, and public interest organizations of many constituencies have weighed in with opposition to FSIS’ industry-friendly proposal.