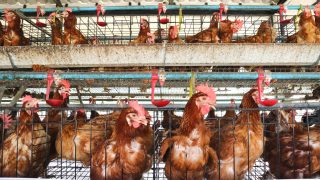 Judgment will expose abusive and unsanitary conditions at egg farms

San Francisco, CA– This week the United States District Court for the Northern District of California ordered the U.S. Food and Drug Administration (FDA) to disclose critical information about factory egg farms to the public.

The Animal Legal Defense Fund, the nation’s preeminent legal advocacy organization for animals, filed a lawsuit against the FDA in 2012 to compel the agency to produce inspection reports of factory egg farms without censoring important information about the living conditions of the animals. In the January 23 order, the court entered judgment in the Animal Legal Defense Fund’s favor, holding the public is entitled to nearly all of the challenged information the FDA withheld. This decision is a key victory for animal protection, and for transparency.

“For years, the government attempted to conceal this information about the egg industry’s cruel practices, to shield factory farming from public knowledge and criticism,” said Animal Legal Defense Fund Executive Director Stephen Wells. “Transparency is necessary for accountability and animal protection, and is required by the law.”

The Animal Legal Defense Fund filed a Freedom of Information Act (FOIA) request in December 2011 to obtain information related to total hen population and population density at several factory egg farms in Texas, information the FDA collects under the federal Egg Safety Final Rule — but the agency refused to make it public at the behest of the egg industry.

Conditions at factory farms have a direct bearing on the animals’ health and on food safety — high population density and unsanitary conditions are associated with diseases like Salmonella, bird flu and E. coli. But the FDA redacted important information in its FOIA response, contending that egg production information would cause competitive harm.

In 2013, a magistrate judge ordered the FDA to disclose information to the Animal Legal Defense Fund regarding number of birds per cage, the first time a federal court has ordered the disclosure of records regarding factory farmed eggs. But the court denied the request for other information regarding conditions of confinement.

The public relies on transparency in order to expose illegal, cruel and dangerous practices on factory farms and slaughterhouses. Hens used by the egg industry are among the most intensively-farmed animals in the country, making it critically important that the FDA’s Egg Safety Rule records not be suppressed.