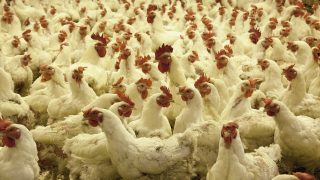 The notice alleges multiple violations of the ESA including not adequately identifying endangered or threatened species, not adequately evaluating the potential adverse impact of the Tracy Project, failing to consult with the proper agencies, and failing to use best available science to inform biological assessments of the project. Clearing land for industrial animal agricultural operations destroys or degrades wildlife habitat, can cause erosion and create fertilizer and nutrient runoff into water bodies hereby degrading water quality and causing pollutants to enter aquatic ecosystems and disrupting wildlife. Contaminants associated with industrial animal agriculture operations can be potentially toxic to species.

“The dire impact of factory farms on the environment has already been established. This is not a new frontier,” says Animal Legal Defense Fund Executive Director Stephen Wells. “These agencies are ignoring evidence that poultry operations pose specific risks to wildlife and their environment.”

This industrialized chicken operation is just one of at least 588 chicken houses projected to be constructed in northeast Arkansas to support Alabama-based Peco Foods, Inc.’s new poultry processing facility in nearby Pocahontas. When fully developed, this network of poultry operations could be responsible for emitting more than 700,000 metric tons of greenhouse gases annually—the equivalent of 147,863 cars driven for one year—significant water and air pollution, and causing untold damage to nearby threatened and endangered species.