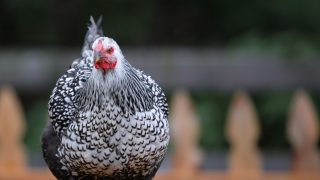 The Animal Legal Defense Fund has filed an amicus brief in a lawsuit aimed at protecting the chickens used during Brooklyn’s annual kaporos festival, and calling on the court to require the City of New York Police Department to enforce state animal cruelty laws.

The kaporos festival is a yearly event held each fall, during which some 50,000 chickens are ritually slaughtered in the streets of Brooklyn, New York. The chickens are killed as part of a religious ceremony practiced by some members of the Jewish faith on the eve of Yom Kippur — the Jewish Day of Atonement. Many religious leaders in the Jewish community promote humane alternatives that do not require the use of chickens.

It is an agonizing ritual for the chickens. Prior to being killed, they are held outside in small and barren wire cages, exposed to the elements, many times without food or water. Then their deaths are painful and often slow. For the ritual, the chickens are swung in the air three times, before their throats are slit. But the throat-slitting doesn’t always kill the birds right away. These injured birds may be placed in garbage bags, deprived of medical care and left to agonizing deaths.

“The NYPD has a duty to protect all crime victims in its jurisdiction and that includes animals,” says Animal Legal Defense Fund Executive Director Stephen Wells. “The way chickens are treated during the festival — confined outside for several days without food, water, medical care, or protection from the elements, and sometimes left to die an agonizing death — is a clear violation of the state’s anti-cruelty laws and should be stopped.”

Represented by Attorney Nora Constance Marino, concerned citizens and the Alliance to End Chickens as Kaporos first sued the NYPD in 2015 for failing take any action to protect the chickens. After a lower court dismissed the case, Marino filed an appeal in New York State’s Appellate Division. Marino is now appealing the New York’s Court of Appeals.

The Animal Legal Defense Fund’s amicus brief is in support of this appeal. In it, we explain the history and statutory construction of the anti-cruelty law, which requires the NYPD to intervene to stop certain acts of cruelty and is not limited to acts of “unjustifiable” cruelty. Under a proper reading of the statute, we argue, the abuse of chickens before and after the religious ritual constitute animal abuse, and the NYPD is required to enforce the law during the festival.

Oral arguments are scheduled for October 17, 2018 — too late for the chickens who will be killed during the 2018 kaporos festival this month, but not too late for the countless more who are entitled to legal protection from torture during future festivals.