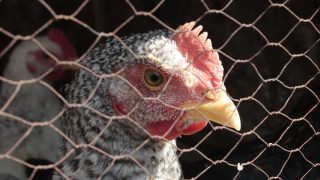 Animal Cruelty? The Legal Way to Abuse a Chicken

Many were horrified to learn of the recent “unconscionable act of animal cruelty” where four killers broke into a Foster Farms facility and massacred 920 chickens by beating them to death with a golf club and other weapons. Some wondered why, even though chickens are sentient and can feel pain, fear, and stress, they do not receive constant legal protection from harm. The U.S. legal system treats animals differently depending on how humans use those animals and whether society views that use as necessary or justified. The same animal can have different legal protections based on the context in which she is being used.

The four Foster Farms perpetrators were charged with criminal animal cruelty under the California anti-cruelty law, even though the chickens were slated to be slaughtered. While this act of killing almost one thousand chickens was considered a criminal act, the systematic, and many times inhumane, slaughter of almost 10 billion chickens every year for food is legal.

Chickens are not protected by the federal Humane Methods of Slaughter Act, which seeks to prevent inhumane slaughter by requiring some farmed animals to be rendered insensible to pain before they are slaughtered. During slaughter, chickens are shackled upside down on a moving rack and dragged through an electrified water bath that should stun them, but might only lead to paralysis. Because birds, including chickens, are not legally required to be slaughtered humanely, many are paralyzed but fully conscious and able to sense pain as their throats are slit. Some chickens are boiled alive by being dunked into a scalding hot tank of water to remove their feathers. (This practice is illegal, but not to protect animal welfare, only as a food safety violation.)

The slaughter of animals for food includes treatment that any reasonable person would consider cruel, but this treatment is not illegal under most criminal animal cruelty laws. Many states have expressly exempted the slaughter of animals used for food from their cruelty laws. Other states imply the exemption by only outlawing “unnecessary cruelty” to animals, in effect stating that slaughtering animals for food is “necessary” cruelty. But it’s not.

The Animal Legal Defense Fund believes all animals deserve protection, no matter the reasons for which humans use them, including animals raised for their meat, milk, or eggs. ALDF has sued a hatchery for their egregious abuse of chicks, supported California’s Prop 2, which outlawed cages for laying hens, and took an egg farm to court for abandoning 50,000 hens and allowing most to starve to death. We will keep fighting to protect all animals, including chickens, but the best way you can help is to adopt a compassionate plant-based diet.