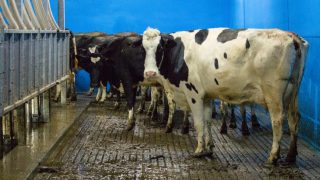 Animal Advocates Fight Back Against Slaughterhouse’s Attempt to Silence Critics

In its lawsuit, Manning Beef asserts that Los Angeles Cow Save is trespassing by holding vigils on the road in front of its Pico Rivera slaughterhouse. The purpose of these vigils is to bear witness to the suffering of animals headed to slaughter and raise public awareness about cruelty to farmed animals.

Today’s motion to dismiss was filed by the Animal Legal Defense Fund, the Law Offices of Matthew Strugar, and attorney Ryan Gordon, in Los Angeles Superior Court under the California “anti-SLAPP” (Strategic Lawsuit Against Public Participation) statute. The purposes of this statute is to empower activists to dismiss lawsuits that punish them for speaking out on issues of public concern.

“Manning Beef’s lawsuit is a transparent effort to silence advocates and curtail their right to freedom of speech,” says Animal Legal Defense Fund Executive Director Stephen Wells. “Los Angeles Cow Save has a right to make public what this slaughterhouse wants to keep hidden from public view. This lawsuit is a textbook example of why California has an anti-SLAPP statute.”

Attempts to stifle animal advocates’ exercise of free speech are not isolated to Manning Beef. The Animal Legal Defense Fund won a major anti-SLAPP victory in February after a Texas judge dismissed a lawsuit claiming the Animal Legal Defense Fund defamed Landry’s Inc. and the Downtown Aquarium, after publicly commenting on the inhumane living conditions of four tigers held at the restaurant and aquarium in Houston.

Other Animal Save groups, most famously Toronto Pig Save in Canada, have also been targeted for their activism.