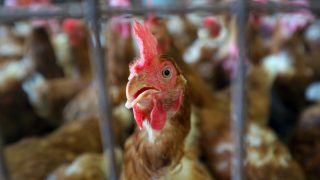 Many consumers who eat animals and animal products strongly prefer to buy only “humane” products, but this term is not well-regulated, and unfortunately, many products advertised as “humane” may not actually reflect what consumers think they are buying and supporting. One example is the chicken sold by Foster Farms and marketed as “American Humane Certified,” a private certification label created by the American Humane Association (AHA). Yet, AHA standards permit standard industry practices, which are anything but humane. Foster Farms also markets some of its chicken products as “fresh” and “natural,” even though Foster Farms’ chickens are denied everything that is natural—like foraging and dust-bathing—to them.

Foster Farms’ cruel treatment of chickens begins at the start of the production process. According to a class action lawsuit against Foster Poultry Farms filed in California, under AHA standards, Foster Farms can source from hatcheries (including its own) that only comply with the National Poultry Improvement Plan (NPIP). However, the NPIP permits de-toeing—a debilitating procedure where roosters’ toes are cut with surgical sheers to prevent scratching, de-beaking—the cutting off of the ends of chickens’ beaks, without anesthesia so chickens will not peck each other in the crowded and unnatural conditions in which they are kept, and grinding up of live male chicks since they cannot lay eggs and are, thus, useless at hatcheries.

The American Humane Certified label also allows chickens to experience cruel living conditions, where they are overcrowded, forced to breathe air with concentrations of ammonia up to 25 parts per million, and suffer a host of medical problems, including chronic joint and leg pain.

Further, AHA standards permits inhumane slaughter practices, including shackling and hanging live chickens by their feet before slaughter, a painful and stressful process that can result in broken bones. Under AHA standards, some chickens drown in scalding hot water as the industry standard bleed-out time is often not long enough to kill the chickens before they are submerged in de-feathering tanks.

Given the conditions chickens actually endure, Foster Farms’ labeling its chicken products as “humane” is deceptive. Ironically, in a survey conducted by the AHA itself, when asked “[w]hat does a humanely raised certified label signify to you when seen it on meat, dairy and egg products?” 95% of respondents said “better treatment of animals.” So, an overwhelming portion of ordinary consumers would likely see the American Humane Certified label on a package of chicken, and believe that chicken received better treatment than other chickens on the market, even though AHA certification allows treatment that is often no different and, in some cases, worse than standard factory farming industry practices and the labels are in no way a guarantee that Foster Farms’ chickens didn’t suffered through the cruel practices listed above.

On July 13, 2015, California consumers filed suit against Foster Poultry Farms, claiming Foster Farms’ use of “American Humane Certified” labels on their chicken products is misleading and deceptive. In response to the complaint, Foster Farms challenged the plaintiffs’ causes of action by filing a demurrer, which is set to be heard today.

Foster Farms is claiming that the court should not hear the consumers’ case because the United States Department of Agriculture controls the labeling of poultry products under the federal Poultry Products Inspection Act. But the State of California has long had power to protect its citizens from false advertising, and to prevent animal cruelty. Regardless of the outcome of the hearing on this jurisdictional issue, consumers should arm themselves with truth about “humane” labeling, or choose plant-based alternatives to eliminate cruelty from their plate completely.