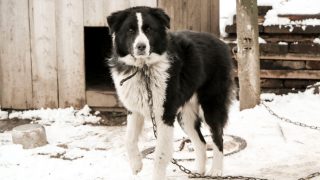 Animal Legal Defense Fund Contributes to More Than $7,000 Reward for Information Leading to Arrest and Conviction in Case of Abused Border Collie

ST. LOUIS — The national nonprofit Animal Legal Defense Fund (ALDF) is offering a $3,000 reward for information leading to the arrest and conviction of the perpetrator(s) who abused a five-year-old border collie mix named Pazzo. The dog was found with a knotted rope around his waist and genitals, severing his genitals in half. The crime occurred in North St. Louis, in the Baden neighborhood near Christian Avenue, on or before March 27.

When staff at Stray Rescue of St. Louis discovered Pazzo—after being alerted about another dog by U.S. Marshals—the rope was embedded deeply in his waist, causing him excruciating pain and infection, which would have led to a slow, torturous death. Once back at Stray Rescue’s Vet and Trauma Center, Pazzo went into surgery to have his waistline sutured. He has also undergone the first of several reconstructive surgeries, and will need heartworm treatment to battle that life-threatening illness.

Under Missouri’s anti-cruelty code, MO. Stat. § 578.012, a person who purposely or intentionally causes injury or suffering to an animal, or who knowingly fails to provide adequate care to an animal in that person’s custody, which results in substantial harm to that animal, is guilty of a class A misdemeanor (for first-time offenders—imprisonment up to one year and/or a fine up to $1,000) or a class D felony (for repeat offenders or those who inflict torture or mutilation on a conscious animal—up to four years imprisonment and/or a fine up to $5,000).
Pazzo’s plight has struck a nerve in the community and the response has been immediate. Individuals and organizations including the Animal Legal Defense Fund are donating toward the reward for information leading to an arrest and conviction. ALDF’s contribution is $3,000, bringing the total reward to more than $7,430.

“Pazzo has suffered agonizing pain from this sadistic act,” said Stephen Wells, executive director of the Animal Legal Defense Fund. “The abuser responsible for this cruelty poses a grave threat to the community: people and animals alike.”

If you have information about this crime, please call the Stray Rescue animal abuse hotline at 314-771-6121 ext. 255 and the St. Louis City Police.