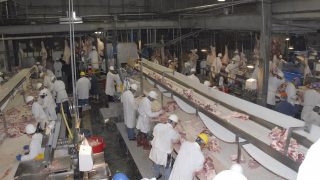 Humans and animals are each exploited for profit in industrial agriculture, often by enormous, multinational corporations. Farm workers — many of whom are members of vulnerable populations — earn poverty wages to perform dangerous and traumatic jobs. Improved conditions for and treatment of workers and animals are interconnected.

Farm workers in animal agriculture are exposed to serious health threats, including viruses like the bird flu and swine flu, as well as drug resistant bacteria. Bacteria — such as salmonella, E. coli, and staph — can jump from confined animals to workers, causing Methicillin-resistant Staphylococcus aureus (MRSA) and other difficult-to-treat infections. Farm workers in industrial animal agriculture also often breathe air permeated with noxious gases including ammonia and hydrogen sulfide, and with particulate matter — tiny particles made up of dried manure, bedding materials, animal dander, and chicken and turkey feathers — that can cause or contribute to several respiratory diseases.

In these hazardous environments, workers must perform jobs that are themselves dangerous, such as moving stressed and aggressive animals or performing amputations without anesthesia, and killing animals by crude means, such as manual blunt force trauma (e.g., slamming piglets’ heads on the floor or wall). On top of this, when emergencies occur — like the COVID-19 pandemic — slaughterhouses may slow down and halt processing, and farm workers may be forced to quickly kill and dispose of thousands or even hundreds of thousands of animals in environments that were never meant for such mass slaughter. Having to engage in these large-scale cruelties day after day, in dangerous and dirty environments, exacts a steep physical and psychological toll on farm workers.

This legislation will help establish important protections, benefiting both workers and animals.

“Colorado’s agricultural workers have been exploited for far too long in this state, and it’s well beyond time for us to provide them with the dignity and respect they deserve,” said Senator Jessie Danielson (D-20th Jefferson), a lead sponsor of the bill. “Ensuring that these workers are able to earn a living wage, get overtime pay, have adequate access to breaks and water, and are protected against retaliation is simply just the right thing to do.”

“Colorado lags far behind other states when it comes to affording basic human rights to agricultural workers,” said Senator Dominick Moreno (D-21st Adams). “These workers are often exploited for cheap labor and they can’t even discuss workplace conditions with their colleagues without fear of retaliation. This law will ensure basic protections for ag workers that already apply to every other worker across our state.”