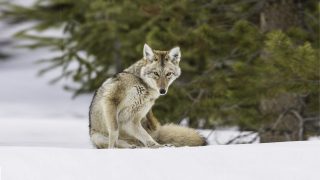 An Act Relating to Trapping and Hunting (H. 172)

Every year, raccoons, coyotes, minks, and other furbearing animals are maimed or killed by traps. Trapped animals endure extreme cruelty, often suffering from dehydration, starvation, and broken bones, and left vulnerable to attack by other animals. These animals also frequently suffer slow, painful deaths; some even chew off their own limbs in a desperate attempt to free themselves. Those who survive until the trapper returns are commonly bludgeoned or choked to death. Traps also don’t discriminate. Dogs, cats, and protected species have been injured and killed by traps in Vermont.

An Act Relating to Trapping and Hunting (H. 172) would significantly limit trapping in Vermont. The bill would only permit trapping when conducted by a trained and licensed professional, or by a homeowner or tenant if the animal is found in the act of destroying property or attacking a companion animal or farmed animal, or to protect public highways or bridges from damage or submersion.

H.172 would also require a wildlife trapping education course, which would include training and education on topics such as site evaluation, nonlethal methods of wildlife conflict resolution (e.g. repellants, exclusions, habitat modification, etc.), techniques and measures to prevent wildlife conflicts, and specific conditions and methods approved for lethal control of “nuisance” wildlife. These methods are alternatives to trapping, which is generally ineffective at preventing “nuisance” wildlife. For some species, trapping can actually stimulate population growth. Because traps are indiscriminate, there is no guarantee they will capture the target individual “nuisance” animal or even the intended species. Even if a target individual is trapped, in many cases, removing that one animal can simply open space in that species’ niche for another individual to fill. Alternative, non-lethal methods for addressing conflicts with wildlife are often more effective. Proper training on these techniques and devices can help officials identify the root cause of conflicts and implement long term, species-specific solutions that protect wildlife, public safety, and property interests.

H.172 is sponsored by Representative James McCullough (D-Chittenden-2). The bill was read and referred to the Committee on Natural Resources, Fish, and Wildlife on February 2, 2021. The Committee met on both March 31, 2021, and April 7, 2021, before the Legislature session ended on May 28, 2021. The legislature will revisit the bill when it reconvenes in January for the 2022 session.

Learn more about the lack of legal protections for wildlife.