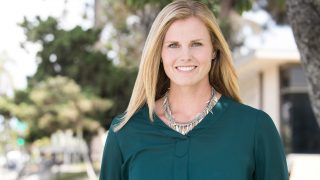 Kim is the Animal Legal Defense Funds’ Legislative Affairs Program Director. In this position, Kim works to develop and advance the Animal Legal Defense Fund’s key legislative initiatives to improve and create stronger animal protection laws.  She received her Bachelors in English and Political Science from U.C. Berkeley where she was an Academic All-American and NCAA Division I Champion in Women’s crew. Kim was a merit scholar at Charleston School of Law where she received her JD.

Before coming to the Animal Legal Defense Fund, Kim was instrumental in helping pass several laws to protect animals in South Carolina. She was appointed to a statehouse committee tasked with reviewing statewide animal welfare laws where she worked with legislators, state agencies, and other stakeholders to examine existing policy and make recommendations to the General Assembly on animal welfare concerns. As inaugural chair of the South Carolina Bar’s Animal Law Committee, she successfully lobbied the South Carolina Bar Association to oppose specific provisions of a contentious “vet care” bill that likely would have violated federal antitrust laws.

Kim chooses to work for the Animal Legal Defense Fund because she sees it is a dynamic organization that plays a critical role in advancing animal welfare through a legal lens yet tackles issues broadly and effectively. She has always felt a strong connectivity with animals, and professionally, she is drawn to the public policy realm. While in Law School, Kim was president of the school’s Animal Legal Defense Fund Student Chapter. Over the years, Kim has presented numerous CLEs including “Trends in Animal Legislation and “Legal Issues Affecting Owners of ‘Dangerous’ Dogs.”

An East Coast native, Kim currently resides in San Diego where she enjoys traveling and being active alongside her family.  She and her husband, Kyle have three children, a cat named Andy and two rescue dogs: Kira and Rowdy, Kim’s sidekick.