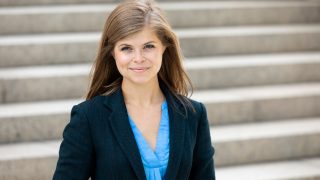 Before joining the Animal Legal Defense Fund, Alicia worked as a public policy coordinator for farmed animal protection at the Humane Society of the United States and as a policy associate at the Animal Welfare Institute. At both organizations she worked to enhance legal protections for farmed animals across the country and contributed to passing a ballot initiative in Massachusetts and legislation in Rhode Island banning the extreme confinement of animals in factory farming operations.

Alicia has a Bachelor of Arts in Environmental Policy from the University of Michigan and a law degree from Western Michigan University-Cooley where she founded and ran the school’s Animal Legal Defense Fund student chapter. In 2016 she received the Wanda A. Nash Award from the State Bar of Michigan Animal Law Section for advancing animal law in the state.

She now lives in Washington D.C. with her husband Luke and Patches, her rescue dog who can’t contain his excitement when meeting new people and other dogs.