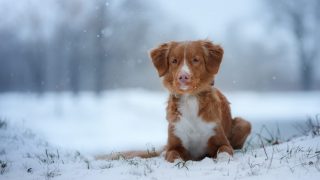 Cotati, CA — With winter—and low temperatures—upon us, it’s important to think about how we’ll keep all our family members safe, warm, and healthy, including the four-legged ones.

The Animal Legal Defense Fund, the nation’s leading legal advocacy organization for animals, has tips for how you can make sure your companion animals sail through even the worst weather winter has to offer. Dogs, cats, and other companion animals are not equipped to handle the cold much better than humans, so it’s important to pay close attention to signals they may be getting uncomfortable.

Companion animals give us unconditional love but they can’t tell us when they get too cold. A little care and caution will go a long way toward keeping all our family members healthy this winter.

If you see an animal in distress outdoors, call 911.

It is not uncommon for dogs and cats left outdoors in the brutal cold to suffer severe frostbite or even to freeze to death. Some areas, like North Dakota and Minnesota, have recorded temperatures as low as 40 degrees below zero.

State laws differ dramatically when it comes to defining the standards of care required for animals. Some states fail to expressly include a requirement to provide adequate “shelter” as an element of the crime of animal neglect. Nebraska, New Mexico, and New York are guilty of this omission.

However, others, like North Dakota (mentioned above) expressly mandate it. For example, in North Dakota, neglect of a dog or a cat includes failing to provide “[s]helter from the elements, as appropriate for the species, the breed, and the age and physical condition” of the animal.

But one thing is certain: it is illegal to cause a companion animal to freeze to death in all 50 states and the District of Columbia.

The Animal Legal Defense Fund is frequently contacted regarding animal cruelty charges filed against people who have left animals out in the cold.

Public scrutiny and law enforcement are our best tools to enforce animal cruelty laws, and that is why we make exposing such neglect—like leaving dogs outdoors to freeze to death—a priority and make sure violators of these laws are held accountable.