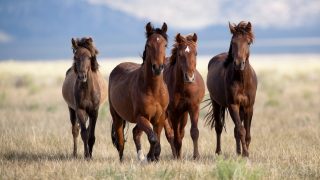 Victory for Wild Horses: Another Chance for Devil’s Garden

For more than a century, federally protected wild horses have made their home in the Devil’s Garden Wild Horse Territory in northeast California’s Modoc National Forest. In a major legal victory for those horses, an Animal Legal Defense Fund lawsuit filed in 2014 has blocked the federal government’s plan to remove protections for a significant portion of the territory and round up the majority of the horses.

Over 400 horses live in the Devil’s Garden Wild Horse Territory, which was established in 1975 after the animals were granted protections in 1971 under the Wild Free-Roaming Horses and Burros Act.

The territory is federally managed by the Forest Service, a division of the U.S. Department of Agriculture, which shocked horse advocates when it announced plans to dramatically reduce the size of the protected lands and consequently doom horses on unprotected land to dangerous roundups.

Roundups involve diverting horses into corrals using helicopters, separating them from their families. Wild horses are sent to a facility for “adoption” which frequently leads to their sale for slaughter in Mexico and Canada.  The Animal Legal Defense Fund filed suit against the Forest Service to halt their plan and retain as many protections as possible for the wild horses of Devil’s Garden.

The Devil’s Garden territory initially consisted of two discrete sections of land, but in the 1980s, Forest Service maps drew the territory boundaries to include a new “middle section” linking the original plots of land. Subsequently, the Forest Service consistently protected and managed wild horses in that middle section.

Why is the Devil’s Garden Territory So Important?

Federal protections under the Wild Free-Roaming Horses and Burros Act don’t provide horses the true sanctuary they deserve, but they are important. In removing the middle section from official Devil’s Garden Wild Horse Territory, the Forest Service shrank the protected area by some 25,000 acres, thereby eliminating wild horse access to crucial foraging and water resources and simultaneously severing two now-disjointed portions of the territory and cutting off gene flow between those portions.

Horses on that land would no longer enjoy modest protection from cruel roundups as methods of “managing” the horse population. In fact, a roundup was carried out in Devil’s Garden in 2016 after requests were made by private landowners. Farmers claim the wild horses use water and land they require.

As we so often see, the needs of wildlife unjustly come in second to the demands of farmers who raise animals for food. More than 200 horses were removed during the 2016 roundup.

Taking the Government to Court

We filed suit in 2014 in the United States District Court for the District of Columbia, representing the American Wild Horse Preservation Campaign, Return to Freedom, and an individual wild horse advocate in California. We argued that the government did not engage in a proper decision-making process about the effect of changing the Devil’s Garden wild horse territory.

The government protected horses there for decades and treated that as part of the territory, and needed a good reason to change the borders of the territory. The Forest Service could not just claim that it made an error thirty years ago when it included that land in the territory.

The District Court ruled in favor of the Forest Service, but the Animal Legal Defense Fund pushed forward and appealed to the D.C. Circuit Court of Appeals. On Aug. 4, 2017, the D.C. Circuit agreed with us, finding that the Forest Service engaged in improper decision-making because the agency did not adequately explain its change in policy, and failed to adequately consider the potential environmental impact of changing the boundaries.

“The Service tries to shrug off its inclusion of the Middle Section in the Wild Horse Territory as some sort of inconsequential and passing ‘administrative error,’ as though that label nullifies any agency duty to reasonably explain its about-face. But there is no ‘oops’ exception to the duty of federal agencies to engage in reasoned decision-making. Accordingly, the Service’s decision runs aground on both the facts and the law.”

We Will Keep Fighting for the Horses of Devil’s Garden

The D.C. Circuit’s ruling establishes that the Forest Service’s plan to shrink the protected territory was unjustified, and provided no legally sufficient justification for sidestepping an environmental review. The decision requires the Forest Service to reconsider its decision to remove the middle section from the Devil’s Garden territory. No matter how the Forest Service decides to proceed, the Animal Legal Defense Fund will continue advocating for the horses to retain their protections.

Those who care about horses as much as we do should follow us for more information and updates on this case.

The Animal Legal Defense Fund would like to thank public interest law firm Meyer Glitzenstein & Eubanks LLP and the past work of pro bono attorney David Zaft for their invaluable legal assistance on this case.