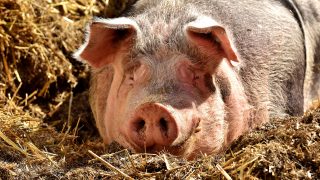 The Friendly Faces of Farmed Animals

Today’s Speak Out for Farmed Animals challenge is to share the cutest picture of a farmed animal on social media! Don’t forget to use the tag #SpeakOut!

Animal advocates are rarely born. Our concern for other animals is natural, but over the years, social norms and customs that don’t consider animals’ interests take over. For most of us, we were raised thinking the exploitation of animals, particularly farmed animals, is normal.

This was the case for my brother and me. We loved dogs and cats and horses and rabbits with abandon, as children. Added to that, I always loved wolves and coyotes, chimpanzees, and gorillas. And I had an affinity for the whole animal world, from prehistoric dinosaurs to the farmed animals I saw around me in the heart of California’s dairy farms. I stopped eating animals at the age of 20, when I put the pieces together. Only later did I learn about the devastating environmental impact and health nightmares caused by animal agriculture.

But my brother’s story was different—and perhaps even more common. For years, he watched his big sister advocate for animals, and when it came to working with dogs, he supported me. As a professional athlete, he began to consider a plant-based diet after learning about the health benefits of cutting out saturated animal fats, and foods laden with GMOs, antibiotics, and other chemicals necessary to contain the spread of disease that always lingers in industrial animal agriculture. After a few years, he started to get really mad about the environmental impacts of animal agriculture on the planet, especially after he learned about ag gag laws that infringe on our constitutional rights.

Always an animal lover himself, things really clicked together when he had children. What messages did he want to pass along to his progeny about compassion and how to be in the world with others? If the family loved the dog so much—a sweet pit bull named Mary—and could never bear to see her suffer, why should compassion end there?

Since then, my brother has become an animal advocate, and I’m proud of him and his children. He recently took his young family to a local animal sanctuary called Animal Place, located in Grass Valley, California. They spent time petting cows and pigs and learning about hens and their highly social behavior. The challenge was, after seeing these animals as individuals as colorful and alive and sentient as their pup, could they eat animals again? The answer was a resounding “no.”

He posted that challenge on Facebook and asked people who consume animal products, merely because it is what they’ve always done, to visit an animal sanctuary and see if that impacts the way they view animals and the choices they make about contributing to the industry that by the sheer numbers causes the most animal suffering bar none.