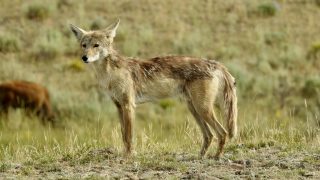 Help end coyote killing contests. Tell your state senators to support HB 2728. Your legislators need to hear from you about this important legislation.

You can send an email and/or call your state senator using the form below. Phone calls have much more impact than emails. If you’re able to make a phone call, please do so.

Killing contests are cruel and not grounded in science. Participants compete to kill as many animals as they can during a set time period, and prizes and money are awarded for various categories, including for the largest and smallest animals killed.

The Oregon Legislature is considering a bill (HB 2728) that would ban coyote killing contests — the most common species targeted by these cruel events. This bill recently passed the House of Representatives and is now in the Senate.

Over nine contests have been held in Oregon in recent years. This past January, in a contest in Southeastern Oregon, more than 272 coyotes were killed over a two-day period for the chance to win thousands of dollars in cash and prizes.