The Animal Legal Defense Fund would never be able to use the law to advance the interests of animals without the support of legal professionals nationwide. In this continuing series of spotlights, ALDF’s Animal Law Program salutes attorney Meena Alagappan.

Meena Alagappan recalls the path that brought her into the burgeoning field of animal law. “I was a student at Northwestern University School of Law in 1990, and I wrote a law journal article on the United States’ enforcement of the Convention on International Trade in Endangered Species of Wild Fauna and Flora,” she says. “As an animal lover from childhood, I found it fascinating to learn about this whole world of legal issues involving animals, and I was always intrigued by the possibility of utilizing my law degree one day to help animals.” Upon graduating, she joined ALDF’s attorney referral network, but it wasn’t until a few years later that everything gelled. 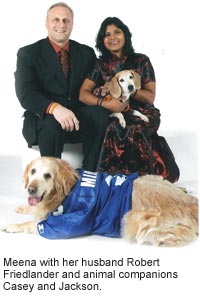 “I attended a conference at the NYC Bar Association on the Legal Status of Non-Human Animals and was jolted into action since that is when I met a group of local lawyers that I could actually collaborate with through the New York City Bar Association’s Committee on Legal Issues Pertaining to Animals, also known as the Animal Law Committee,” she says. Meena was so impressed by what these pro bono lawyers were accomplishing on behalf of animals that she joined them and then decided that animal law would also become the focus of her professional life. “Until that point I had been practicing corporate law and teaching for an academic test preparation company,” she says. “I enrolled in the M.S. program in Animals and Public Policy at Tufts University School of Veterinary Medicine. When I graduated from that program, I chaired the New York City Bar’s Animal Law Committee for three years and then chaired the American Bar Association’s Animal Law Committee. I have found incredible gratification in my animal law volunteer work through these channels.”

Complementing her passion for compassion, Meena is the executive director of HEART (Humane Education Advocates Reaching Teachers), a non-profit public charity that is a full-service humane education provider in the New York City and Chicago areas. HEART offers, free of charge, multi-lesson in-class instructional and service-based programs for K-through-12 students in various venues in school, after school, and in summer camps. “Our mission is to foster compassion and respect for other human beings, animals, and the environment by educating youth and teachers in humane education. What I love about humane education is that it is not just about raising awareness, but it is about doing so in a way that promotes compassionate behavior.”

Meena believes, as many others do, that humane education can function as a valuable deterrent to violence and help break the cycles of abuse. “The human/animal violence link has been well documented,” she says. “Clinical case studies of troubled youth and retrospective studies of violent criminals have repeatedly disclosed a link between childhood animal abuse and later interpersonal violence. Humane education programs can be an important step in halting these cycles of violence.” Meena emphasizes that an important part of HEART’s work is conducting humane education teacher training workshops for schoolteachers, animal activists, concerned citizens, attorneys, and law students. “We have conducted credit-bearing professional development courses through the New York City Department of Education, training workshops for non-profit animal protection groups, and recently we launched a public-service project with the American Bar Association’s Animal Law Committee and Law in Public Service Committee.” HEART has been training attorneys and law students to teach a four-lesson humane education program addressing a range of animal-related issues to 4th and 5th grade students at local elementary schools. So far, they have conducted workshops in Baltimore, Chicago, New York City, and Washington, DC. “In fact, in Chicago we co-hosted the workshop with ALDF and Northwestern Law School’s Student Animal Legal Defense Fund chapter.”

At home, Meena enjoys downtime with husband Robert Friedlander — also an ALDF member and volunteer — and four senior animals. “Dilbert Louise Friedlander is our loyal, sweet, courageous, and elegant 19-year-old calico with an insatiable appetite, and Gordon Stewart Friedlander is our very conversational, chubby, playful and assertive 8-year-old tabby, who was adopted through a group called Cat Assistance in Westchester. Casey Alagappan is our 13-year-old Golden Retriever, adopted from North Shore Animal League in Long Island 12 years ago. He is so loving, always jovial, very gentle, knows he’s adored, and loves holding plush toys. Jackson Alagappan is our 9-year-old beagle mix, and I fell for his dramatic, appreciative, fun, and curious personality at an adoption event of the Mayor’s Alliance for NYC’s Animals in Central Park in 2004. He was totally irresistible in his bright orange ‘Adopt Me’ vest!”

Among her heroes in animal law, Meena counts ALDF founder Joyce Tischler and attorney Steve Wise. “They both played a big role in giving me exposure to animal law, and they are totally dedicated to the animals.” She also admires her friend and colleague Jane Hoffman, who co-founded the first Bar Association Animal Law Committee in New York City and is the president of the Mayor’s Alliance for New York City’s Animals. “Since the New York City Bar’s Animal Law Committee is how I met my husband and how I became connected to my job at HEART, and the Mayor’s Alliance for New York City’s Animals is how I met my beagle boy Jackson, how could I not be grateful to Jane, too?”

Meena says that ALDF has often served as her source for various animal law opportunities. “For example, in 2002, I received an email from ALDF that the Great Ape World Heritage Species Project was looking for assistance, and I volunteered to research various laws, policies, and agreements relevant to the protection of orangutans in Malaysia. ALDF has been a terrific resource over the years.” And she notes that the organization is a great way to meet compassionate, likeminded people. “If ALDF had a match-making site, I could have met my husband much sooner!”

You can learn more about HEART by visiting www.teachhumane.org.