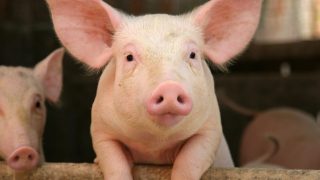 Washington, DC – Today the Animal Legal Defense Fund, Public Justice, and the Richman Law Group filed a joint lawsuit in the District of Columbia Superior Court against Hormel Foods, alleging the company is misleading consumers through the advertising of its Natural Choice® brand of lunch meats and bacon.

With the slogan “Make the Natural Choice®” and repeated claims that its Natural Choice® products are “100% Natural” and “All-Natural,” Hormel Foods has run a wide-ranging advertising campaign that takes advantage of consumers’ beliefs that “natural” meat comes from animals raised in a specific, sustainable way.

According to a 2015 Consumer Reports survey, half of consumers believe the “natural” designation means animals were raised outdoors. Hormel’s Natural Choice® products, in contrast, are not from more humane or more natural farms, but come from the same industrialized factory farms as any of Hormel’s other products.

“Meat companies like Hormel have been quick to pounce on misconceptions about what ‘natural’ means,” says Animal Legal Defense Fund Executive Director Stephen Wells. “As an organization dedicated to transparency in animal agriculture and truth in meat advertising, the Animal Legal Defense Fund is standing up to vindicate the rights of deceived consumers and to prevent Hormel from wrongfully gaining an advantage over more humane farms.”

Some of Hormel’s standard factory farming practices were recently revealed in shocking new undercover footage from one of Hormel’s largest suppliers. The undercover investigation was carried out by the Animal Legal Defense Fund.

“Hormel’s ‘natural’ meats come from the same pigs and the same giant, factory slaughterhouses that are used for the company’s canned Spam® products,” said Leah Nicholls, Staff Attorney at Public Justice. “The so-called ‘Natural Choice®’ products are not ‘natural’ by any definition a mom or dad would expect or rely on when deciding what to feed their family. Hormel also treats these products with ‘acid starter culture’ in order to produce artificial preservatives Hormel is misleading consumers and misrepresenting how its meats are produced in a brazen attempt to sell products at premium prices that boost the company’s bottom line.”

The Richman Law Group has filed numerous cases against food companies falsely using the word “natural” to describe their products that are anything but. “This case represents a new line of attack on meat companies taking advantage of consumers seeking out natural foods,” said Kim Richman of the Richman Law Group.

Today’s suit was filed on behalf of D.C.-area consumers, and alleges Hormel is violating the D.C. Consumer Protection Procedures Act.