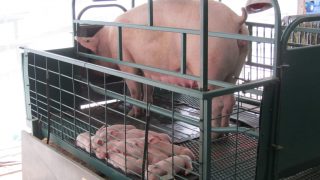 SAN FRANCISCO — On Tuesday, June 16, the California Court of Appeals will hear oral arguments in the Animal Legal Defense Fund’s (ALDF) lawsuit against the Regents of the University of California (UC Regents) and California Exposition and State Fair (Cal Expo). The lawsuit alleges that the UC Regents and Cal Expo unlawfully spent taxpayer resources by transporting, confining, and exhibiting pregnant and nursing pigs at the Livestock Nursery Exhibit at the California State Fair in violation of the state anti-cruelty law.

ALDF’s lawsuit alleges that nursing mother pigs were placed in body-gripping “farrowing crates” for three weeks at the 2013 California State Fair, and were unable to walk, turn around, or stand comfortably. California’s anti-cruelty law, particularly penal code sections 597 and 597t, protects farmed animals by mandating adequate exercise for confined animals, and prohibiting their needless suffering. In December 2013, the Alameda County Superior Court held that newly enacted Proposition 2—which prohibits some forms of confinement but does not prohibit farrowing crates—supersedes the anti-cruelty law and dismissed the case. On Tuesday, the California Court of Appeals will hear oral arguments in ALDF’s appeal of this ruling.

“Californians do not support the intensive confinement of mother pigs.” said Stephen Wells, executive director of the Animal Legal Defense Fund. “The State should not be spending taxpayer resources to support this unnecessary and outdated practice especially when it violates the State’s own cruelty laws.”

Copies of the lawsuit are available by request.