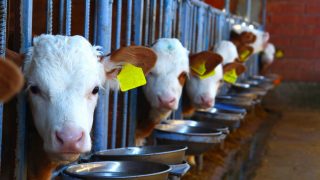 The New York Times just released the shocking results of an investigation of outrageous cruelty to animals used in taxpayer-funded experiments. The experiments attempt to create farmed animals who yield more meat, cost less to produce, and have more offspring. This unregulated research benefits the meat industry’s quest to sell more meat, but the animals pay for it dearly.

The U.S. Meat Animal Research Center (MARC), funded by your tax dollars through the USDA, seeks to genetically manipulate animals to increase the animal agriculture industry’s bottom line. The animals used in these disturbing experiments are largely unprotected; federal laws generally do not protect farmed animals from mistreatment or being used in inhumane research.

For ten years, MARC has been trying to create sheep that require less effort on the part of the farmer (i.e., can survive without costly barns) by making sheep give birth alone in open fields, where baby lambs are often abandoned by their mothers and killed by starvation, weather, or torn apart by coyotes. One quarter to one third of the lambs die.

And for nearly thirty years, the facility has been genetically manipulating cows, who do not naturally have litters, to produce twins. 95% of female twins were deformed, and the death rate of twin calves was four times higher than single calves. These animals don’t even receive basic care. Thousands have starved and died from exposure to bad weather, and hundreds have died from mastitis, a painful and easily treatable udder infection.

Researchers without veterinary or medical degrees operate on and euthanize these animals. A MARC scientist was quoted as saying, “A vet has no business coming in and telling you how to [operate on animals].” MARC currently has only one veterinarian on staff, and that person and others have complained repeatedly to managers about a failure to fully consider the pain that animals suffer during experiments.

No Oversight for Animal Experiments

No federal laws govern the treatment of farmed animals used for experimentation. The Animal Welfare Act, which provides minimal protections for animals used in experiments and held in captivity, exempts the farmed animals used in experiments at MARC. Additionally, the USDA reportedly fails to enforce its own rules, which require careful scrutiny of experiments by a review committee. It also does not require MARC to keep records for treatment of all the animals. And, until now, the public had no idea that the government spends tens of millions of dollars to help the meat industry complete these horrific experiments that have caused pain and suffering to thousands of animals.

What Can You Do?