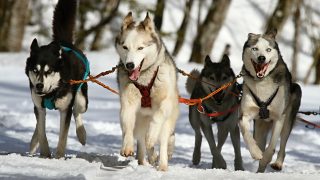 The annual Alaskan Iditarod is a grueling race through 1000 miles of the roughest terrain on earth, in temperatures that drop well below zero. Teams of dogs run, sometimes up to 100 miles a day, for 7-10 days. The human mushers compete for substantial financial rewards—even at the cost of injuring dogs. Animal Legal Defense Fund Founder and General Counsel Joyce Tischler explains:

Under the laws of some states, commercial dog sledding practices would be considered criminally cruel. In California, for example, the state criminal anti-cruelty law makes it a crime to inflict needless suffering or unnecessary cruelty upon an animal—including by overworking an animal. Conveniently for the Iditarod backers, Alaska’s anti-cruelty law conveniently exempts standard dog sledding practices and lets the industry define what is acceptable.

Since the Iditarod began decades ago, more than 140 dogs have died from heart attacks, pneumonia, muscle deterioration, dehydration, diarrhea, and spinal injuries. Some have been impaled on sleds, drowned, or accidentally strangled. Injured dogs are left alone at checkpoints, according to the Sled Dog Action Coalition. And big game animals, like elk and moose, who get in the way of the race, may be killed. During the off-season, sled dogs are generally kept chained to their doghouse in an outdoor kennel. Often, when the dogs are no longer profitable, they are killed.

And it’s not just Alaska—last year, a Colorado sled dog operator was charged with eight counts of animal cruelty after an investigation revealed starving, sick, and constantly tethered dogs left out in the cold. From the 1990s through 2014, the operator of Krabloonik Sled Dog Center was accused of “culling” his dogs by gunshot, as well as neglect, punching and beating dogs, and providing inadequate shelter.

Another commercial sled dog enterprise in Colorado at the Pawsatrak Racing Sled Dog Kennel also got in hot water for cruelty to animals. Authorities found six dogs dead on the premise and the rest were seized. A veterinarian who performed necropsies attested that the neglect of these dogs was chronic. Both owners were convicted of criminal animal cruelty.

In fact, cruelty charges have been filed against operators at sled dog operations all over the country, from Maine to Montana to New York—the abuse and neglect of sled dogs is horrific, pervasive, and chronic. Any time animals are used as objects to produce profits, in under-regulated industries, their well-being is in danger. Please do not support this inherently cruel industry.